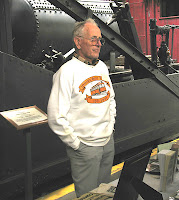 Sad news that Brian K. Darragh passed away on December 20th at the age of 93.

Darragh was a long-time employee of Winnipeg Transit and believed to be Winnipeg's last streetcar operator. He drove them during their lat 17 months of service.

Darragh was passionate about streetcars and took his collection of great stories and memorabilia and turned them into a book called The Streetcars of Winnipeg: Our Forgotten Heritage.

I had a chance to meet Darragh a couple of times at talks he gave related to the Streetcar 356 Rehabilitation Project. I also interviewed him for my radio show back in March 2015.

Thanks for all the great stories and for keeping the memory of Winnipeg's streetcars alive!

- My March 22, 2015 interview with Darrah on my former UMFM radio show, West End Dumplings - The Radio Edition with co-host Kerri Salki. (He's the first 30 minutes of the show.)

- Remembering the streetcars of a bygone era - Canstar Community News