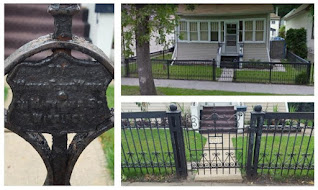 While delivering a community newsletter in August, I kept my eyes peeled for the dwindling number of beautiful wrought iron fences in the West End. Each year, more and more get replaced by chain link but a few of the old beauties remain.

Fences are normally not the sort of thing you can research, but I came across one on Simcoe Street that still had the badge from the maker: John D. Watson of 711 Maryland Street. It was a great find and I thought I would see what I could find about the man.

John D. "Jack" Watson came to Canada from his native Scotland. His obituary and entries in a couple of census documents vastly differ as to what year - it may have been 1908 when he was 23 years of age. His wife, Rosa, and her son, Arnold, came to Canada from Ireland around 1906 when the boy would have been about eight years old. It is unclear what year they married.

Jack first appears in a Winnipeg street directory in 1907 having taken over the blacksmith shop of G. A. Authier at 725 Furby Street near Notre Dame, (now demolished). At the time he was living in a rooming house a couple of blocks over at 669 Langside Street. 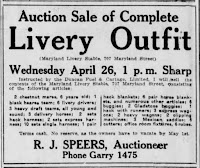 In 1911, Watson moved his business to (presumably) larger premises at 711 Maryland Street.

Today, this land is now home to the Maryland Tot Lot, an extension of Wellington Avenue, and a modern-era apartment block, but up until 1910 was home to the Duncan Fuel and Cartage Company, (fuel at the time meant wood and coal). Because it was such a horse-intensive business they also operated Maryland Stables on the site. In 1910, two men are listed as working there as horseshoers.

The Duncan's businesses went under and its contents were auctioned off in April 1911. The site was then split with the Crescent Creamery Stables to the south, at number 709, and Watson's blacksmith shop at 711.

Along with the new business address came a new home address: a rented house at 484 Sherbrook Street. (This makes me believe he got married around this time as having a wife and growing boy in a rooming house would have been difficult.)

Watson ran a small shop with just one other blacksmith / horseshoer working for him.

The blacksmithing industry saw great change in Watson's time and this could be seen in his ads. He rarely advertised in the teens to late 1920s, then did so regularly from the late 1920s into the early 1940s. His ads reflected the growing importance of things like wrought iron fences and gates to his business.

Normally it would be impossible to date a fence without seeing a receipt or an order book, but this one might be an exception. Watson only used the name "Watson Fence Works", as per the badge on the fence, to describe his business in Free Press classified ads that ran from April to October 1931. This fence could be from that period.

Watson was a long-time member of the Manitoba Blacksmiths, Horseshoers, and Carriage-makers Association and served in various roles on its executive from the 1920s through the 1940s. The organization entered teams in sports leagues, set prices and wages, and ran an apprenticeship program to try to attract the next generation of workers.

Watson was treasurer in 1946 when 120 members from Manitoba and Saskatchewan came to Winnipeg for an annual meeting held over two days at the McIntyre Block and wrapped up with a banquet at the St. Charles Hotel. At that meeting, they changed the name of the organization to the Blacksmiths, Welders and Repairmens Association to reflect the evolving nature of their industry.

Around 1915, the Watsons moved to 1053 Sherburn Street and by 1924 moved into 630 Simcoe Street where they would live for more than two decades.

Watson retired in 1948. Fred Buck, who had been manager of the shop for a couple of years, took over and kept the Watson Iron and Wire Works name.

Around 1950, the Watsons moved to Victoria B.C. where Jack died on June 30, 1963, at the age of 76. His body was returned to Winnipeg for a funeral and burial at Elmwood Cemetery.

In February 1969, Crystal Builders applied for a zoning change to build a 2.5 storey, 13-suite apartment block on the site. The Marywell Apartments took the address 605 Wellington Avenue.

Related:
Some examples of West End wrought iron fences at my Flickr album.