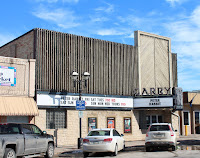 Landmark Cinema's Garry Theatre in Selkirk, Manitoba has closed after nearly 75 years in business. It was a mix of the economic realities of operating small houses and the prolonged shut down due to COVID.

This building was constructed in 1948 for Rothstein Theatres Ltd. of Winnipeg. Between the 1920s and 1950s, Nathan Rothstein built a chain of dozens of theatres, mostly in small prairie towns, and the Rose and Roxy theatres in Winnipeg. He entered the Selkirk market in 1938 when he took over the city's ca. 1919 Central Theatre.

The Central became too old and small to get first run movies by the 1940s and in 1948 David Rothstein, Nathan's son who took over the day-to-day management of the company earlier that year, announced that a new theatre would be built on Manitoba Avenue.

There is no mention of who the architect was, though Max Zev Blankstein was the Rothestein's go-to architect for many of their cinemas in Manitoba and Saskatchewan. Claydon Construction of Winnipeg was likely the contractor.

The Garry opened on November 29, 1948 and the era of first-run films returned to Selkirk. The venue was "mixed-use" with a small stage so that live events such as recitals, speeches, and church services could also be held there. (On opening night, besides the film, certificates were presented to youth swimmers by the Red Cross and the Selkirk midget baseball team, runners up in the provincial final, were given awards.)

A series of upgrades took place starting in 1953. This included a new projector, the repainting of the auditorium and scheduled for the following spring was the installation of a new central air conditioning system.

On January 3, 1954, the Garry suffered a fire that gutted the building. Nobody was inside at the time and the fire department managed to save the buildings on either side of it.

Photographic evidence appears to show that while the auditorium portion was destroyed by the fire, the front portion of the building with the projector room above and lobby below manged to survive.

The new Garry Theatre opened on April 12, 1954 with a showing of Kiss Me Kate.

An ad from the period states that the theatre had 110 seats, though modern sources say that there are 317 seats. This would have required an expansion of the building to the north at some point and renovations that would have removed the crying rooms and perhaps even the size of the stage.

The Rothsteins sold their theatre holdings in 1972 to Rokemay Theatres Ltd, a forerunner to Landmark Cinemas. The Garry closed in 1976 for extensive renovations inside and out, (which could have been when the interior was redesigned to hold more seats). That same renovation is when the wood facade was added  and makes the cinema seem much newer than it really is.

The Garry shut down with other non-essential businesses on April 1, 2020 and will not reopen.

UPDATE: On August 24, 2021, the City of Selkirk announced that it bought the building for $350,000 before it hit the open market and will soon undertake community consultations about uses for the venue.