The rebirth of Modern Electric Lunch

I had some inside information about the possibility of reviving the name when I was contacted by the  building's developers who found stacks of receipts for "Modern Electric Lunch" when they were renovating. As fate would have it, they were considering opening a café in the space and asked me to look into the history of the business. Here is what I found:

The origin of the café's name dates back to the Electric Lunch opened by the Murphy family in 1917 in the now demolished Commonwealth Block further north at 526 Main Street at James Avenue. 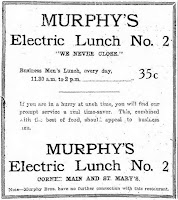 In 1925, the Murphys consolidated their operations back to their original 526 Main Street location and newspaper ads for the fortune Block's Electric Lunch No. 2 noted that the family had "no further connection" the business.

The new owners were Anjelo J. Valentine of 118 Machray Street and Harry Romanuk of 390 Salter Street.

Valentine was a long-time restaurant manager, most recently at George Stanley’s Restaurant at 538 Main Street. He was also secretary of the Restaurant Keepers Association of Winnipeg. Romanuk had been the chef at C V Café at 353 Main Street.

The duo began offering a “businessman’s lunch” with four-course meals perhaps as a way to reach a higher class of clientele than the railway workers it served as a café. (See below for a sample menu.) 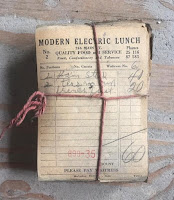 Aside from the name, it is unlikely that there was any connection between the two cafés. Soon after the renaming, No. 1 underwent a major expansion and renovation into an upscale tea room.

In 1929, Romanuk left the café to work for the CPR and Valentine may have retired or moved from the city as he no longer appeared in local street directories.

Oscar Williamson was the next proprietor. He got in trouble in April 1930 when the labour department charged him with not paying proper minimum wage to six women who worked there. He plead guilty and spent eight days in jail until he came up with the money to compinsate them.

Modern Electric lunch then carried on for many years under Chinese ownership.

Kong made the papers in July 1932 after the café was raided by the morals squad as part of a slot machine crackdown. Slots were not illegal as long as they were just for fun and no money could be won. Kong added blank slugs to his machine's coin cache and when the machine "paid out", customers could - with a wink - cash in the slugs in for cigarettes. Undercover police saw the machine in action and charged Kong who received a hefty $200 fine.

Russell Quong of 222 Smith Street took over the business in late 1934 and changed its name to "Winnipeg Electric Lunch". He ran it along with Jimmy Mah into the mid-1940s. 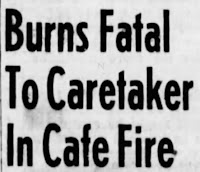 Tragedy struck in March 1944 when Frank McEwan, the building’s caretaker, was burned to death in the basement of Winnipeg Electric Lunch.

A regular breakfast customer arrived at 6:15 a.m. and was waiting for the café to open. He saw smoke coming from the basement and ran to the side entrance to notify Russell Quong who was busy in the kitchen setting up.

Mr. Morgan, the customer, groped his way down to the basement and found McEwan badly burned and sprawled on his back in front of the furnace. An ambulance was called but the man died en route to the hospital. It was thought that he was tending the furnace when its doors blew open and his clothes caught fire.

Winnipeg Electric Lunch appears to have lasted for just another year. After that, Quong moved on to run the Dominion Cafe at 43 McKenzie Street at Jarvis Avenue. It is unclear what happened to Mah as he disappeared from local street directories.

The business was was re-branded the Tourist Café by new proprietor Louis Chatelain in late 1945 and the Electric Lunch name disappeared from the Fortune Block for the next 75 years. 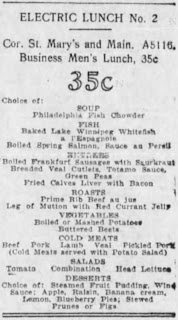 At Spores Lab We aim to leverage our knowledge and experience on the various methods of cultivation to empower individuals with the information, supplies, genetics, and guidance necessary to cultivate their own psilocybin mushrooms.
Psilocybin mushrooms have shown in several studies conducted at prestigious educational and research institutions to be both safe and effective in the treatment of many psychological conditions, including but not limited to;

Psilocybe Spores
Spores are the reproductive cells used to propagate a fungal culture.
Offered in an Spore Prints and Spore Syringe

Live Psilocybe Cultures
Expedite the cultivation process by starting with an isolated culture.
Offered in a Rye infused Agar medium.

Mushroom Growing Supplies & Equipment
Get all of the supplies and equipment necessary to grow mushrooms in one place.