I love a history mystery and found one on the website of the Jewish Post and News.

Recently, the Saul & Claribel Simkin Centre received a $725,000 donation from the Estate of Myer and Corrine Geller of San Diego, California. They said of the donor, "All we know about the Gellers is they had no children and Myer was a 1943 graduate of St. John’s High School. Further, Mr. Geller went to MIT, became a physicist and was granted several patents."

The Simkin Centre's roots date back to 1915 and the Winnipeg Old Folks Jewish Home on Elgin Avenue. It's is now on Falcon Ridge Drive in Linden Ridge.

As Bernie Bellan asks in the pages of the Jewish Post and News, "So, the question that tantalizes is: Why would someone who had left Winnipeg 70 years ago want to leave such a substantial donation to the Jewish nursing home?"

Bellan did some further digging into the history of the Gellers and was able to fill in a few of the gaps but a lot of mystery remains. I thought I would try my luck and see if what bits I might be able to fill in that. (If YOU know more about the family, Bellan asks that you contact him at jewishp@mymts.net or 1-204-694-3332.)

The earliest mention I can find of the Geller family comes in the 1921 Census of Canada. It shows Max Geller, 30, wife Sarah, 24, and eldest child, Rose, 3, renting a room at 689 Selkirk Avenue, the home of the Peck family.

The census taker noted that the parents were Jewish and had emigrated from Russia, Sarah in 1912 and Max in 1913. Rose was born in Manitoba ca. 1918.

Max's profession is listed as a merchant of produce and eggs.

(In case you're wondering how I know this is THE Geller family - after all, there were about seven Geller families, three of them with a Max as the head of household - all will be revealed !)

For reasons unknown, these Gellers do not appear in any of the prairie provinces in the 1926 census, the last one that is publicly available. It could be that they relocated for a while, their name was horribly misspelled, or they got overlooked somehow.

The Gellers had two more children: Frances ca. 1922 and Myer ca.1926. Records of their births cannot be found at the Manitoba Vital Statistics Database. These could be more oversights or lends weight to the theory that the Gellers may have been away from the province for a number of years.

It is hard to track people in the Henderson Street Directories when they are renters and don't have steady jobs from year to year. This was the case with the Gellers through the 1930s.

The family does put down traceable roots ca. 1941 when they purchased a little wartime bungalow at 284 Bannerman Avenue. This was around the time their children were of high school age.

Max Geller's entry in the 1942 Henderson Directory lists him as a travelling salesman. From 1943 to 1945, he is a produce manager. No place of work is ever given.

In 1946, Max gets into the fur industry as an employee of Elias Reich and Co. fur manufactures located on the 6th floor of the Jacob Crowley Building. He worked there and for its successor, J. H. Hecht, until 1948.

The Gellers seem to disappear from the directory in the early 1950s, but are back at 284 Bannerman by 1954. The 1957 directory notes that Max is retired, though worked part time as an attendant at the DonEll Parking Lot which is the surface lot still located at Donald and Ellice.

Max and Sarah relocated to the Perth Apartments, Unit B, at 204 Perth Avenue in 1964. 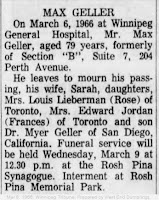 Max Geller died on March 6, 1966 at the Winnipeg General Hospital. He was survived by Sarah and their three children. Rose, Frances and Myer all lived in different cities.

An obituary can't be found for Sarah Geller. This suggests she may have moved in with one of her children after Max's death.

Rose would have been born ca. 1918 in Manitoba according to the census. There were a couple of Miss Rose Gellers in Winnipeg coming of age in the mid to late 1930s and early 1940s. The Rose Geller in the social pages and on the executive of the YMHA was likely the daughter of Issac, owner of The Stag Lunch Counter on Main Street, who lived on Burrows Avenue.
From her father's obituary, it is known that she married Louis Lieberman, though a wedding announcement can't be found in the local daily papers. (This wasn't the same man as furrier Louis Lieberman. His wife's name was Etta.)

By the time of her father's death, when was living in Toronto. An obituary for Rose can't be found in local papers, suggesting she never came back to the city.

Frances was easier to track in her younger years. She attended St. John’s Technical High School and in 1939 won an entrance bursary to attend St. John's College. Her arts degree was supplemented with special "War Work" courses that featured classes in home nursing, telegraphy, physical training and first aid.

Frances graduated in 1943 and worked as a clerk for the Bank of Montreal until 1948 while still living at home. In 1945, she joined the executive of the Junior Hadassah.

Geller would have been born ca. 1928, but a record of that birth is not at the Manitoba Vital Statistics website. He graduated from St. John's Technical High School in 1943 and received the Israel Gutman award of $100 from the St. John's High School Home and School Association.

A number of Geller's classmates went off to war after graduation, but there is no record of him enlisting.

If he attended the University of Manitoba, as one of the above articles states, he didn't stay for long as he does not appear in any of the 1940s U of M yearbooks. He received his Masters in physics from the University of Minnesota and his PhD from the Massachusetts Institute of Technology in 1955.

In the business section of the Pasadena Independent Star News of November 6, 1960, above, it notes that Geller became senior scientist in the Solid State Division of Electro-Optical Systems. The same notice in a 1961 edition of Physics Today notes that he was formerly of Hughes Products.

In last decades of his life, he appears to have worked for Naval Oceans Systems Center in San Diego. His father's obituary notes that he lived in San Diego as early as 1966 and Myer is listed on a number of the organization's patents starting in 1977. (His research is referenced in numerous scientific papers and he has a number of patents.)

Back to the original question: Why would someone who had left Winnipeg 70 years ago want to leave such a substantial donation to the Jewish nursing home? I could not find an answer.

It doesn't appear that Myron Geller's parents or his siblings spent the end of their lives at the nursing home. None of them, it appears, were on its executive or hosted fundraising events for it.

Hopefully, a few more bit have been filled in that will allow genealogy fiends to dig in a bit deeper. Also, when the Jewish Post and News archive are back online there are a few new names to check out.

Manitoba Vital Statistics only include births from more than 100 years ago in their searches.