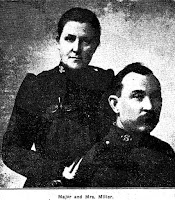 With the exception of a some federal Department of Public Works employees, few architects have had the same national impact as Gideon Miller, the in-house architect for the Salvation Army from 1906 - 1931.

Miller was the son of a Paris, Ontario businessman who joined the Salvation Army as a teenager in the 1880s. He worked his way up the ranks at various southern Ontario postings.

The organization had a Property Division in the early 1900s made up of two members. They noticed that Miller was very adept at repairs and small building projects and he was asked to join the department in 1902. He was put to work right away with a small extension to a Toronto hospital and building homes.

Miller spent much of his downtime drafting building plans to hone his skills. He then took an architecture course by correspondence. It was said that he passed with marks averaging 96 out of 100.

After a few smaller projects, Miller found the confidence to start submitting plans for more substantial structures to his superiors. Realizing the cost savings for the organization if it could design its buildings in-house, they gave Miller the opportunity to prove himself.

Miller designed a three-storey men's hostel in Toronto, then worked on the new Grace Hospital in Winnipeg under senior architect W. Woodward.

The plans were drawn up in 1905 for this three-storey with full basement, brick building with stone trim. It extended 150 feet along Arlington Street on what had been part of a golf course. It opened in May 1906.

The building was seen as state-of-the-art for its time. It featured multiple balconies to allow patients to get fresh air, dumb waiters to transport supplies and a self-contained laundry in the basement. The wards could hold up to 140 women and girls. 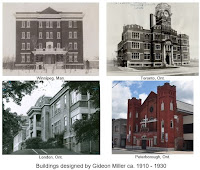 Within a couple of years, Miller was designing his solo projects, including hostels, citadels, hospitals and colleges from Newfoundland to British Columbia. A partial list of his buildings can be found here, though it should be noted that Salvation Army buildings were often noted in newspapers as being designed "by the Salvation Army", not accredited to Miller, so the true extent of his work will likely never be known. (Also see, Vancouver, Peterborough, and the Empress of Ireland Monument at Mount Pleasant Cemetery.)

Miller, for instance, came to Winnipeg in July 1909 and April 1910 with a group of Salvation Army executives to discuss expansion plans for the prairies and Northwestern Ontario. Numerous local buildings were constructed as a result of these meetings, including an extension to the main citadel on Rupert Avenue, new citadels on Aikins Street, Pritchard Avenue and Queen Street in St. James, the Kildonan Industrial Home (1911) and a three-storey hostel for men.

The Grace Hospital was also expanded to the west along Preston Avenue in 1911 and 1927 from Miller's designs.

In 1926, Miller was given the rank of Colonel and made the Chief Secretary for the organization's Canada West Territory.

BE SMART AND BECOME RICH IN LESS THAN 3DAYS....It all depends on how fast
you can be to get the new PROGRAMMED blank ATM card that is capable of
hacking into any ATM machine,anywhere in the world. I got to know about
this BLANK ATM CARD when I was searching for job online about a month
ago..It has really changed my life for good and now I can say I'm rich and
I can never be poor again. The least money I get in a day with it is about
$50,000.(fifty thousand USD) Every now and then I keeping pumping money
into my account. Though is illegal,there is no risk of being caught
,because it has been programmed in such a way that it is not traceable,it
also has a technique that makes it impossible for the CCTVs to detect
you..For details on how to get yours today, email the hackers on : (
atmmachinehackers1@gmail.com ). Tell your
loved once too, and start to live large. That's the simple testimony of how
my life changed for good...Love you all ...the email address again is ;
atmmachinehackers1@gmail.com