I love researching "lonely houses", so when I saw this one at 202 Christie Street in Selkirk I had to find out what stories it had to tell. The fact that it is slated to be torn down by the city in 2020 gave my research a sense of urgency. (You can read other lonely house posts here, here and here.)

Selkirk did not have a Henderson Directory, just a weekly newspaper with an incomplete digital archives, so piecing together building histories can be hit and miss. Luckily, this house belonged to one family for around 100 years !

Frederick (Fred) Charles Barnard was born in England ca. 1883 and moved to Selkirk around 1908. Annie Harris Wilson was born in Canterbury, England and came to Canada around the same time, but lived in Montreal and Winnipeg.

The couple married in Winnipeg in June 1923 and soon after relocated to Selkirk where they had four children: Charles, Gerald, Helgi (Yole) and Elaine. (Charles' birth date year was ca. 1913 and Helgi's ca. 1914 suggesting they may have been adopted or from a previous union. There is, for instance, a record of a Frederick Charles Barnard marrying an Annie Herbert in Brandon in March 1913.) 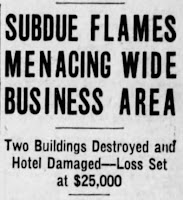 Fred was an avid cricketer and ran the pool hall inside the Merchants Hotel. His livelihood was threatened on the night of May 30, 1930 when the neighbouring building on Manitoba Avenue caught fire. It destroyed that building and damaged the hotel, wiping out the contents of the pool hall. (The fire was so bad that Winnipeg firefighters were called in to help keep it from spreading down Manitoba Avenue.)

The pool hall must have been rebuilt. In one Selkirk history book an old timer remembers Fred operating it during the 1940s.

As for Annie, during the Second World War she was the first president of Selkirk's ANAVETS auxiliary and did Red Cross work. She was also a long-time member of Christ Church Women’s Association.

Annie died in 1953 at the age of 70 at the home of her daughter, Helgi, in Selkirk. Fred died September 12, 1964 at Winnipeg General Hospital at the age of 81. They are buried at St. Clements Cemetery.

The house then became home to Gerald (Gerry) Barnard. A mechanic by trade, he married Margaret Lee from Semple, Manitoba in October 1952. The couple had no children.

This was never a secluded residential neighbourhood. The house was located just 30 metres from bustling Eveline Street with its industrial sites, fish plants and commercial docks. It faced the rear of civic buildings on Eaton Avenue and its immediate neighbour to the east was the back end of a large medical clinic.

The land west of the house appears to have been open, presumably part of it was a school field. At a 1961 town council meeting it was noted that 220 Christie was zoned "park" rather than commercial or residential.

It was around the time of the Barnards' deaths that the neighbourhood began to change as the services around it expanded.

A new civic centre was built on the site of the old town offices in 1960 and an adjacent fire hall soon followed. A new Selkirk Medical Centre opened in 1973 on the site of the old one. A fire in the early 1970s that destroyed a business block along Main Street between Eaton and McLean Avenue led to the construction of phase one of the Town Centre shopping mall which opened in 1975.

By the mid 1970s, the house had many of the same neighbours, just bigger in size, and that was something that Gerry Barnard railed against.

Barnard often appeared at town council and planning commission meetings to air his grievances about parking, traffic and zoning issues around his house. In the 1980s he even hired a lawyer after his numerous complaints about the sound of commercial air conditioners from surrounding buildings were not acted upon.

By the 1990s, Barnard was retired and started a number of campaigns that kept him in the news. He opposed the expansion of the mall site in 1995 to create a bigger grocery store. That same year, he tried to get skateboarding banned in Selkirk, something he revisited in 1997 and 2003. He was also the town's most vocal opponent against public funding for the Selkirk Recreation Complex, a battle he kept up even after the complex was open and running.

After Gerry's death, the house took on a surprising new life.

The City of Selkirk purchased it in May 2014 for $181,426 with the intention of demolishing it to make way for additional parking for a proposed expansion to the fire hall across the street. It offered the building to Our Daily Bread for use as a homeless shelter until that expansion was completed. Rene Gauthier, the organization's chair, had tried in previous years to get a winter shelter open but ran into opposition each time.

After some renovations to bring it up to code the home was renamed the St. Francis Place Homeless Shelter and opened in November 2014. It contained six beds in three bedrooms, a kitchen, bathroom with shower, and a washer / dryer.

In January 2018, the shelter had to close due to a lack of volunteers. The writing was on the wall for the house, anyway. The city broke ground on the fire hall expansion in June 2018 and it officially opened in September 2019.

$14,000 has been included in Selkirk's 2020 capital budget to cover the cost of demolition.

Email ThisBlogThis!Share to TwitterShare to FacebookShare to Pinterest
Topic: Selkirk