The 1970 saving of the Sherwell Apartments 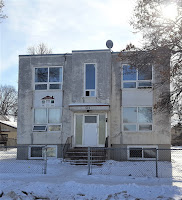 This is part two of a post about the Cumberland Corridor created in 1970. For part one.

At first glance, the six-unit Ross Apartments at 610 Ross Avenue appears unremarkable. It is one of many hundred small residential blocks that dot the inner city. The story behind how it got to this site 50 years ago, however, was big news and a symbolic victory for community organizations in an era when thousands of people were being displaced from their homes for new urban developments.

The group at the centre of the story is the People's Committee for a Better Neighbourhood Inc.. It operated from a small building at 155 Isabel Street and served what was known then as Roosevelt Park, or Urban Renewal Area 2, bounded by Sherbrook Street, William Avenue, Princess Street and Ross Avenue. It dealt with issues such as access to health care, food security and affordable housing in the neighbourhood.

The looming urban development that hung over the neighbourhood through the 1960s and 70s was the possible Sherbrook McGregor overpass that would replace the ageing Arlington and Salter Street overpasses. The roadways leading up to the structure would have cut a swath through the heart of the neighbourhood and require the demolition of a couple of hundred buildings and the displacement of over 1,000 people.

The University of Winnipeg's Institute of Urban Studies (IUS), headed by Lloyd Axworthy at the time, worked closely with the People's Committee. In April 1970, an IUS staff member forwarded to the group an ad taken out by Metro Winnipeg seeking tenders for the mass demolition of eighteen properties along the route of what would become the Cumberland Corridor. It was a reminder that a similar fate, but on a much larger scale, could face their neighbourhood.

The People's Committee convinced Metro Winnipeg to postpone the demolitions so that they could see if any of the residential structures could be moved to a new location. After inspection, thirteen were deemed to be suitable and they chose two houses and a small apartment block. Vandals soon broke into the houses and caused extensive damage leaving them with just the six-unit Sherwell Apartments built in 1955 at 728 Sherbrook Street.

The city refused to donate a piece of land for the block to sit on and provincial government, which was responsible for housing, also did not offer any assistance. As the Citizens Committee scrambled to find a new home for the Sherwell, the roadworks project was well underway and an impatient Metro Winnipeg announced that the building would be demolished on Friday, June 26th.

Two days before the demolition deadline the Peoples' Committee organized a march that attracted about 50 people. It ended at the legislature where, in front of the media, they called upon Howard Pawley, then the minister responsible for public housing, to help save the building.

The next day, the province announced that it would provide a $48,000 low interest loan to the Peoples' Committee to offset the cost of the move and the construction of a new foundation. Metro ended up kicking in the $2,400 it would have cost to demolish the building.

It was happy news for the group. Stickers were made for store windows in Roosevelt Park that read "We got it - Peoples' Committee Moving Apartment". One of the first to put one up was George Myers of Myers Drugs, a member of the group. 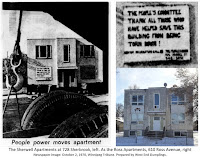 The Sherwell, before and after the move

A lot was procured on Ross Avenue across from the mostly abandoned Midland Rail yard site, now the sports field behind the Freight House. The Sherwell was moved on the night of September 19, 1970 and sat while a new foundation, including two basement suites to replace the ones left behind on Sherbrook Street, were added. It also received new windows and other renovations.

On December  12, 1970, a grand opening of the newly rechristened Ross Apartments took place with 200 people in attendance. Guests included included Howard Pawley and Peoples' Committee chairwoman Wyn Noble. The group would be in charge of finding tenants and managing the building.

At the opening, Noble said that this should be the model for future expropriations - that good housing stock be moved rather than demolished. That, of course, wasn't the outcome, though the Peoples' Committee did renovate a number of derelict homes through the early 1970s.

The relocation of the apartment block was a symbolic victory showing that grassroots community groups could fight the city and have an impact on housing. Lloyd Axworthy summed up the building's importance in a May 15, 1971 interview with the Winnipeg Tribune:


"The apartment block was the first step. It effectively demonstrated the capacity of a neighbourhood group, supported by technical and professional services, to become responsible for the redevelopment of their own area".

Hello everyone, I'm Patricia Sherman in Oklahoma USA right now. I would like to share with you my experience of borrowing USD $185,000.00 to clear my bank draft and start a new business. It all started when I lost my house and I took my stuff because of the bank policy and I met some bills and some personal needs. So I became very desperate and started looking for funds in every way. Fortunately for me, a friend of mine, Linda told me about a credit company firm, I was intrigued by the fraud, but I was intrigued by my situation and had no choice but to get advice from my friend about this company. contacting them really doubted me because of my past experience with online lenders, did you know that little? '' Elegantloanfirm@hotmail.com This company has been very helpful to me and my colleague and today, thanks to this credit company, the proud owner of well-organized work and responsibilities, they smiled back at me. So if you really need to grow or start your own business, or if you really need to borrow money in any financial hardship, we recommend you find a financial development opportunity in your business today. {E-mail:} Elegantloanfirm@hotmail.com ... online for credit not a victim of scam. Thank you.

Do you need an urgent blank ATM CARD to solve your financial needs and i just want to tell the world my experience with everyone. i discovered a hacking guy called Mike. he is really good at what he is doing, i inquired about the BLANK ATM CARD. if it works or even Exist, then i gave it a try and asked for the card and agreed to their terms and conditions. three days later i received my card and tried it with the closest ATM machine close to me, to my greatest surprise it worked like magic. i was able to withdraw up to $4000. This was unbelievable and the happiest day of my life. there is no ATM MACHINES this BLANK ATM CARD CANNOT penetrate into it because it have been programmed with various tools and software. i just felt this might help those of us in need of financial stability. The card have really change my life. if you want to contact them, HERE is the email: int.hackers002@gmail.com