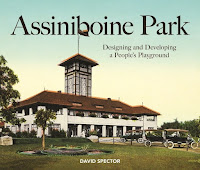 We tend to take our parks for granted, assuming that these spaces were found much as they are and simply sprinkled with a few human-made amenities. For the most part, though, as much work went into creating them as any suburban neighbourhood. Every field, treed stand, and pond were conscious design decisions and developed by human hands.

In his 245-page book, Spector takes us through the decisions that led to creation of the park we enjoy today. He begins with the decades long debate over what type of park Assiniboine should be. At times it pitted parks board members against each other and their parks superintendent as some favoured a more natural space while others wanted a highly manicured setting.

In the end, some large-scale amenities like a zoo and conservatory eventually got the go ahead while a 9-hole golf course and man-made beach came out on the losing end.

Spector tells not only the story of the bricks and mortar development of the park, but also the personalities of those who helped shape it. Some who had a say are rather unexpected, such as Grey Owl (Archibald Belaney) who visited the park unannounced in 1931 and sharply criticized the parks board after visiting its beaver enclosure. (He would tell mayor Webb: "the present care accorded to the beaver was only a refinement of cruelty.")

The book spans the 110+ years since the decision to purchase the land for a park in 1904, its major phases of development, especially post World War II and the 1960s, and into the 21st century with the handover of municipal control of the park and the possible impact of private development on its future.

Well researched and packed with images, if Assiniboine Park is part of your summer ritual, Assiniboine Park: Designing and Developing a People's Playground should definitely be on your reading list !

I was browsing through the book the other day and would have liked to buy it, but the sepia coloured text would have made for an annoying read as I have some vision problems and black letters are just much easier to discern for me. I'm guessing it was chosen to make it feel 'rustic' but it was an odd choice in my opinion.