B.C. Mills' kit Bank of Commerce in Elkhorn is closing 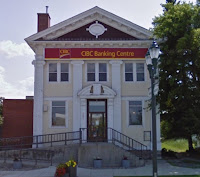 In December 2016, the 461 residents of the Village of Elkhorn, Manitoba were notified that their CIBC branch on Richhill Ave E. would close as of August 2017.

What caught my attention was the image of the bank. Though I've never set foot inside the building, I immediately recognized it and knew much about its history. 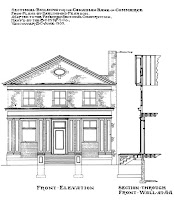 This CIBC branch is one of the original B.C. Mills, Timber and Trading Co. "kit buildings" the bank had created for prairie towns between 1906 and 1910. I know this because there is another kit bank in Rivers, Manitoba, built in 1908 that I followed through its renovation into a single family home.

Prefabricated kit buildings were all the rage in the early part of the last century. As railway development pushed its way west, new villages were instantly created in its path or existing settlements had to quickly pick up and relocate to be nearer the tracks.

For sparsely populated areas it would have taken months or years to build from scratch all of the buildings needed to create a functioning village. That's where companies like Eaton's and B. C. Mills stepped in offering kits for a variety of buildings, including barns, houses, schools, banks, halls and churches.

The kits came with everything needed and would be dropped at the side of the tracks. With just a few men, it could be could be up and functioning in a matter of days. (From companies like the Scott Furniture Co. in Winnipeg, you could order the furniture by catalogue to outfit an entire building.) 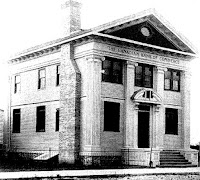 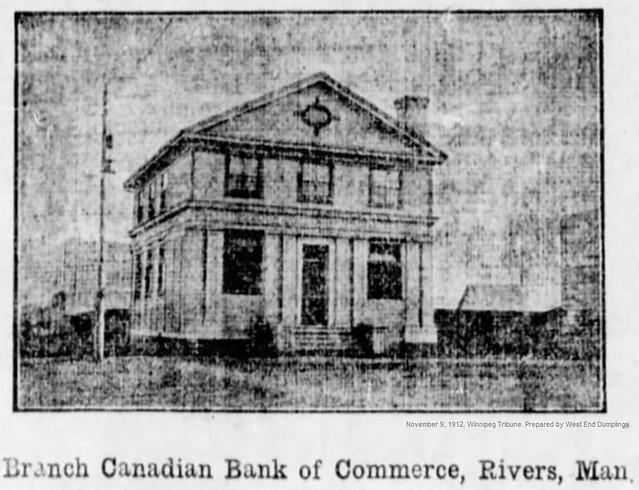 CIBC, then known as the Bank of Commerce, hired prominent Toronto architects Darling and Pearson to design three basic models for their exclusive use. The firm had designed many of the bank's landmark, big-city buildings across Canada, including their main Western branch in Winnipeg.

These building were far more modest. One was for 1.5-storey cottage-style building with a porch. The other, far more widely used, were variations of a 2,800 square foot, two-storey building.

On the main floor, with its 12-foot tall ceilings, was the banking hall and offices plus a vault area at the rear. The the upstairs was the apartment for the branch manager.

The plans were kept on file at B.C. Mills and kits dispatched as needed. Two rail cars was all that was needed to deliver the kit. Its is believed that about 70 of them were erected across the West between 1906 and 1912*. (Historical documents related to BC Mills indicate that they stopped producing prefabricated buildings around 1901. This one was erected in 1912, so they may have had a couple left in inventory.)

From looking at period photos, it appears that these are different models. Note the Elkhorn bank's portico above the door and the ionic columns that extend the entire height of the building.

According to the Elkhorn and District Historical Society, the first Bank of Commerce branch opened in June 1903, which is more than two years before the settlement was incorporated as a village on September 6, 1905.

If the 1910 date of the above image is to be believed, the branch relocated to a B. C. Mills building by that time as it can be clearly seen on the right hand side. 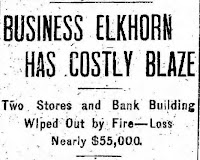 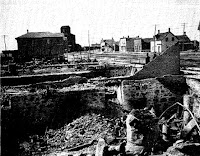 On the evening of March 18, 1912, fire broke out at the Groat Bros. Hardware Store. It razed the hardware store, general store and the Bank of Commerce. The bank's paperwork, though, was saved and construction began later that year on a new B.C. Mills kit bank. It opened in October 1912.

What is unique about the Elkhorn building is that it is still occupied by CIBC after more than a century. Of the remaining B. C. Mills / Bank of Commerce buildings, most have been demolished or converted to other uses as the bank upgraded their premises or left town.

Aside from Rivers, other examples of these buildings can be found in Strathmore AB, Watson SK, Nokomis SK, Grandview AB, Moosomin SK, Elbow, SK, Innisfree AB.

It is possible that the building could live on as a financial institution. At a community meeting in January 2017, bank officials were asked if CIBC would restrict its sale to a credit union. The answer was no and Vanguard Credit Union is exploring the option of creating a location there.

For more images of the Rivers building, including renovation photos, see my Flickr page.

For more images of BC Mills kit buildings, including banks, see the BC Mills pool at Flickr.

For more Elkhorn History, the following can be found at the Manitobia.ca books section under Elkhorn: "Elkhorn 1882-1967, edited by Marion Sipley; Steel and Grass Roots - History of Elkhorn 1882-1982 by Elkhorn and District Historical Society. 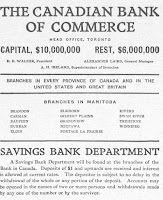 Interesting post. Thought you might be interested to know that there is an identical copy of the Elkhorn bank building in Rockyford, AB. It was originally built in Strathmore and then moved by CIBC in the 1920's to Rockyford. It served as the CIBC branch until about 2005 or so. It still stands and is currently being used as private offices. Its appearance is virtually unchanged with the exception that the ornate pediment above the entrance was removed long ago, and the doors are now a more modern style. The building in Strathmore is similar but not nearly as broad as this one. The two originally stood across the street from one another.

Thanks for adding that !

As a former engineer and banker I was not aware of Sears' kit Banks. Construction materials and local trade carpenters had to have been part of the picture. As an engineer we built a dam in Kansas that did not have a feasible source of rip rap so we improvised with "soil cement". Also when branch banking started with mobile branches, banks had to overcome public resistance to seeing their deposit leave a parking lot. Successful branches were quick to build brick and mortar buildings to convince the public they were invested in the community.