Above: from ourontario.ca
Below: July 19, 1943, Winnipeg Tribune

The first train, with a crew of linemen, was stopped along a curve on the Flin Flon Line which linked The Pas and Flin Flon. Traveling southbound was a train carrying gravel. The crew did not see the stopped train until they were four car-lengths away - too late to respond. Most of those killed were in the caboose of the stopped train.

Above: July 21, 1943, Winnipeg Free Press
Below: From Cranberry Portage a pictorial history p. 26

There was some immediate medical help that came. Nurses F. Starrie and A. Cupples from Cranberry Portage arrived in a few minutes. Margaret Mills, who was on a train to Sherridon which had to be sidelined as the track was now blocked, also went to the scene. Mrs. M. Rozier, a nurse and a cook for a nearby work gang, came to provide medical help and sandwiches for rescue workers. Local men were assisted by some solders from Fort Garry Horse who were also on that Sherridon train.

Most of the Flin Flon Line, including this section, was built on trestles atop a gravel embankment which made clearing the wreck to get at the dead and injured difficult. A crane car was dispatched from The Pas but it derailed just outside of town, the driver jumped to safety just before it rolled. A second crane was called in from Kamsack, SK.

The added delay due to the crane derailment meant that it took about four hours for medical help, a medic train car from The Pas, to arrive. One man, W. A. Watland, died on the train trip to hospital from a fractured skull.

The Flin Flon Municipal council passed a motion protesting the CNR’s "needless delay" in getting medical help to the scene: “...there were three airplanes and a number of speed boats available at Flin Flon that could have carried medical aid to the scene of the wreck in a matter of one hour.” (July 20, 1943, Winnipeg Free Press.) 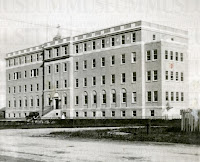 The dead and wounded were brought to St. Anthony's Hospital in The Pas. That is also where the coroner's inquest was held under the supervision of Dr. N. G. Trimble.

The inquest heard from seven survivors, it is unclear if there were any survivors from the stopped train. On August 11 the jury concluded that the crash was an accident and that neither crew was at fault. They did make a general recommendation that the CNR try to find better ways to protect work trains stopped along the track. (If you check out the rest of this series on Manitoba train disasters, almost all of them involved a stopped work train).