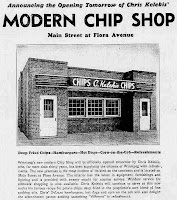 METRO reports that another Winnipeg institution is closing its doors.

C. Kelekis' will soon join Shanghai and Wagon Wheel Lunch on the list of generations-old, family-run restaurants that have closed in the 2010s.

Chris Kelekis was born in Turkey to Greek parents and came to Winnipeg in 1917 at the age of 28. In 1931 he began selling chips from a converted Model-T Ford and in the mid-1940s the family, (wife Magdalene, six daughters and one son), opened a opened a pair of restaurants. The first, at Main and Flora, opened June 10, 1944. In March 1945 Sophie Kelekis paid $1,687. for a lot at Main and Aberdeen on which they built the other.

The restaurants were nearly identical in appearance, offering only a small take out area and counter service. In 1955 the family decided to concentrate at one location and expanded the Aberdeen location to include a dining room. 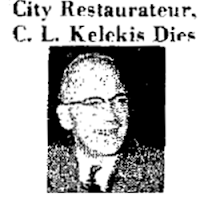 Chris Kelekis died on August 21, 1957 at the age of 68. Though all of his children worked at the restaurant at some point, it was daughter Mary, (credited as the spark behind the creation of Folklorama), that took the reigns.

Some Kelekis ads from that first year ! 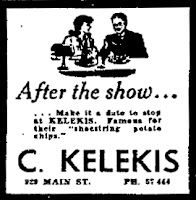 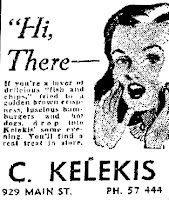 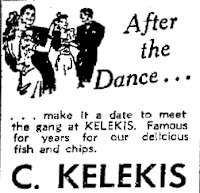 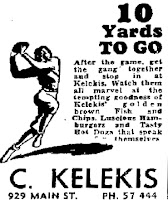 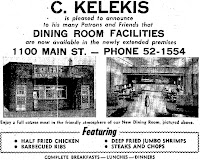