Part of my series on Winnipeg's deadliest fires. 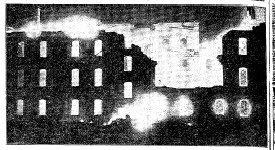 What is likely Winnipeg's deadliest fire took place on November 25, 1922 at the dormitory / library block of College St. Boniface. The building was located about a block from the main college building near the present-day site of CKSB studios.

A Jesuit Brother in the dormitory awoke a little after 2:30 a.m. to what he thought was the sound of an explosion. He noticed that the building was on fire and rang the hand bell to notify students.

Within a couple of hours the building was in ruins. The loss of the library meant that many records of the early Franco-Manitoban community were destroyed as well as theological manuscripts dating back to the 16th century. Most tragic, however, was the loss of ten lives, nine of them students: 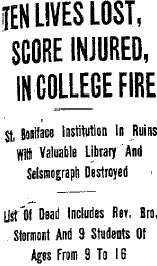 At the inquest into the tragedy a number of sad findings were made.

The college's fire safety practices were found to be inadequate. The school did not do fire drills, nor did it have emergency evacuation plans in place. The building had been cited in the past for faulty and illegal wiring that had never been corrected. One of the Brothers even had a case of live shells stored under his bed which were supplied by the military for a future cadet exercise.

In the confusion, noone actually phoned the fire department. Instead, a staff member was sent on foot, without shoes, to the St. Boniface fire hall to retrieve the fire brigade. 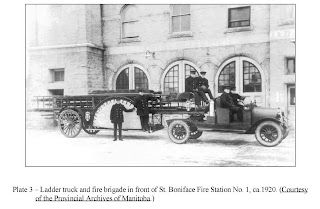 St. B. Fire Brigade and their doomed ladder truck

The inquest's greatest criticism was levelled at the small St. Boniface fire brigade.

There was conflicting testimony about the length of time it took for firemen to arrive on scene. In the end, it appeared that they came as soon as they could after the messenger arrived at the hall. For people at the scene, however, the firemen were to blame for the fifteen to twenty minute delay it took for them to arrive.

The brigade was hampered by a lack of proper equipment.

Weeks earlier, their main ladder truck was totalled when it was struck by a vehicle and sent into the path of an oncoming streetcar at Bertrand and Taché. The Winnipeg Fire Department lent them a smaller, less-equipped truck until a replacement could be purchased. That engine's small ladders could not reach the higher floors and the vehicle did not come equipped with safety nets. Firemen had to learn on-scene how to work some of the engine's pumps. 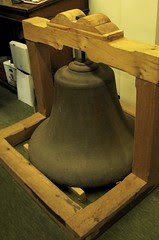 City infrastructure was also an issue.

St. Boniface's water mains were too small for such a large draw on the water supply and at times there was no water pressure at all. A call went out from the fire hall to the city engineer to turn the water pressure to high but he initially refused saying that only the fire chief himself was authorized to give that instruction. It took 55 minutes after that call for the pressure to be increased.

Though some fire equipment and personnel were dispatched from Winnipeg to assist, in those all-important first few minutes at the scene it was the undermanned St. Boniface fire department in charge. At times, hoses were left unattended as the men ran to rescue screaming schoolchildren who were fleeing the building or jumping form its windows.

Though not all of the errors were the fault of the fire department, the impression that many came away with was that they were unprepared and incompetent. Some even called them cowards. 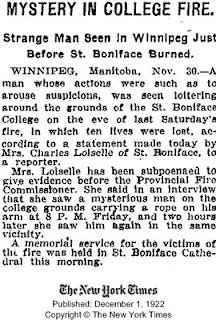 As for the cause of the fire, none could be found initially. Media speculated that it was arson and related to other recent fires set in at religious buildings in both Winnipeg and St. Boniface. One witness testified that she had seen a strange man lurking near the periphery of the school that night.

After further investigation and hearing from 69 witnesses, provincial fire commissioner Charles Heath released his final report on February 7, 1923. His conclusion was that it had been careless smoking in the boys' washroom that started the blaze.

Two masses were held for the victims. The first, a memorial requiem mass, was held on November 30th and drew 4,000 people to St. Boniface Cathedral which had its facade draped in black fabric.

The funeral mass was held on December 5th. A cortège went from the College to the two funeral homes in town and ended at the Cathedral. Only one of the bodies, that of fifteen-year-old William Taylor, could be positively identified, but his parents decided against having him buried separately. The remains of all ten were buried in one grave.

In January 1923, the St. Boniface Fire Department purchased a state of the art fire engine.

A memorial marker for the victims located 150 feet west of the Cathedral.

Though a sad tale; you told it well. Stories like these are important and need to be remembered - I really do appreciate the effort you put into bringing these stories to life. Look forward to more such stories in the New Year.

Thanks for the information! The monument you mention is how I found out about the fire. Lived and worked in the area most of my life but had never heard of the fire.

Did you find the monument? I think it is likely this plaque that you are looking for: http://www.mhs.mb.ca/docs/sites/stbonifacecollegefire.shtml

There is a story about a boy who had begged his parents to let him come home for the weekend, but they'd refused, as that would be bending the rules. The boy then perished in the fire.
The CKSB studios is the only part of the old CSt.B left. You can see the building as the small extension at the right in the picture. A 1950s photo shows a fairly good shot of that place, but unfortunately, it's badly altered today, buried under extensions and brown sheet-metal.

It's actually now closed and for lease. The existing section of the old collège is in terrible shape. The plaque commemorates the old section of the eCollege but sot so much the victims. Just next (slightly Noorth) to the Radio station a split in rue Langevin has a garden. That garden was a shrine for the victims but is now forgotten.

The old part of the radio station was the Collège's kitchen. The garden on Langevin St is the original garden that was in front of the entrance to the grand staircase entrance. It was preserved as a shrine for the victims.

Interesting that there is no mention of the theory that the KKK set the college on fire.

My mother was Franco-Manitoban. Her maternal uncle was a student at the college at the time of the fire and somehow survived (his terrified parents thought he was dead for many hours). It was always explained that the fire was set by the KKK and, out of fear, was the primary reason the family fled to the US for a few years and returned only at the end of the 1920s. I have never been able to find actual documentation that the fire was deliberately set.