Updated January 2014:
January 18, 2014 is the 40th anniversary of the Haselmere Apartments fire that killed nine people. Only the St. Boniface College fire of 1922, which killed ten, was worse in terms of loss of life. (For my series on Winnipeg's 5 deadliest fires.)

Above: the site today. Below: 1930s classified ad

The Haslemere Apartments, (sometimes spelled Haselmere in the media), was a 1910-era, four-storey walk-up at 559 Ellice Avenue at Furby Street. It was home to 28 suites and 51 residents.

Just after 1:15 am on Friday, January 18, 1974, a passing motorist spotted flames in the main floor of the building and drove to a payphone to call it in to the fire department. He told the Winnipeg Free Press:  “By the time I got back, everything and everybody was in hysteria. Some people were still yelling from the windows and some people were jumping.”

Another witness said: "When I reached the apartment block they had just taken away the first person hurt in a jump. There were people screaming and running all over the place and people yelling for help from the windows. I hope I never see anything like that ever again.” 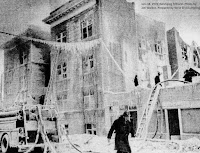 Adding to the misery of the night and hampering the efforts of firefighters was the temperature.

Environment Canada records show that around the time the fire started it was a relatively mild -10 degrees Celsius with a 35 kph wind that created a -20c wind chill. By the time fire officials briefed the media later that morning, it was closer to -20c with a -30c wind chill.

It took firefighters almost five hours to put the blaze out. Three of them were injured when the building's parapet collapsed. The most seriously injured suffered a concussion and spent the night in hospital.

Fire Chief Shewan confirmed later that morning that they had discovered seven bodies with four residents still missing. Another twenty-two had been taken to hospital. Most of the injured suffered from broken bones after jumping from their windows or falling while climbing down drain pipes.

By that evening the list of dead had grown to nine with six people still in hospital. A list of those who died can be found below.

In the days that followed, the city rallied to help the victims.

The Salvation Army spearheaded a fundraising campaign hoping to raise $5,000. Within a week it surpassed $15,000 and by first week of February the total was more than $27,000. Numerous companies came forward with offers of free groceries, furniture and moving services to help survivors rebuild their lives.

The fire was considered suspicious because it started in a basement storage area far from any electrical sources.

Police questioned a number of people but zeroed in on Herbert Wray Williams, a 21 year-old who sometimes stayed with his uncle in his suite at the Haselmere. After a couple of rounds of questioning Williams broke down and told investigators that he had intentionally set the fire.

The younger Williams explained that he and his uncle had been drinking in the suite and got into an argument, after which he stormed out and went to a downtown hotel where he continued drinking. Upon his return, his uncle would not let him back into the suite, so Williams then went to the basement to sleep. There, he saw a storage locker full of old newspapers and in a drunken rage he lit the papers on fire and left.

The case went to trial and on Thursday June 6, 1974, after only six hours of deliberation, a jury found Williams guilty of arson and multiple counts of criminal negligence causing death. He was sentenced to 15 years in prison.

The fire may have been started by an arsonist but officials blamed the building's lack of protection for allowing it to get out of control in such a short time.

The Haselmere had no sprinklers, fire alarms or smoke detectors. Internal stairways were not shielded by a firewall and the exterior fire escapes were unusable. In a January 25, 1998 Winnipeg Free Press story, former fire chief Jack Coulter said that "It was just built to burn".

The reason for these lapses had to do with a "grandfather clause" in the city's fire code which exempted apartment buildings that pre-dated it. The city set about to change this.

By the end of January the existing Winnipeg Buildings Commission was tasked with tackling these deficiencies and on May 15, 1974 began enforcing the fire code for all buildings, regardless of when they were built. 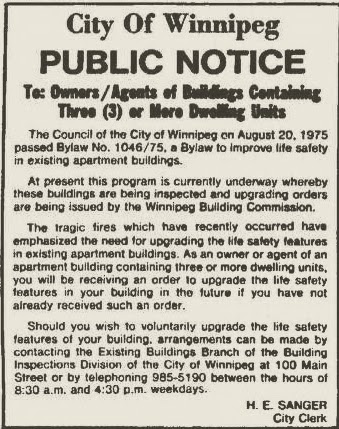 Landlords argued that the required changes would them costs tens of thousands of dollars per building and put many of them out of business. Some raised the dark picture of a housing squeeze as landlords walked away from their properties or demolished them rather than upgrade. They also challenged the legality of the commission to enforce the code retroactively - a tactic which worked.

The city had to go back to the drawing board to create a new bylaw giving the commission the authority to enforce the fire code in existing buildings. The bylaw passed in August 1975 and the long process of inspecting the city's 1,750 apartment blocks, 250 of which were constructed before 1911, began. It would take years to complete.

It was an awful fate for the nine victims but their deaths on that awful night in January 1974 saved the lives of countless others in future apartment fires that were prevented. 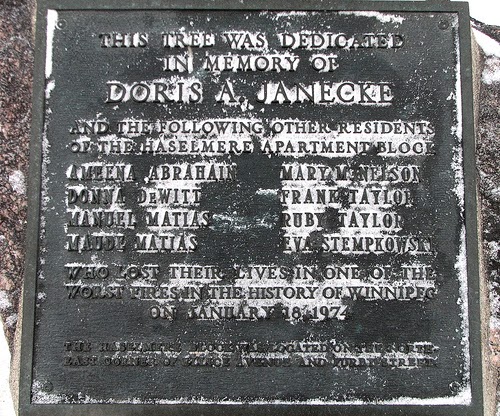 The shell of the Haselmere was torn down in February 1974 and today the site is now home to a Manitoba Housing block.

The victims are commemorated on a plaque in a park across the street from the University of Winnipeg's Ellice Avenue entrance. 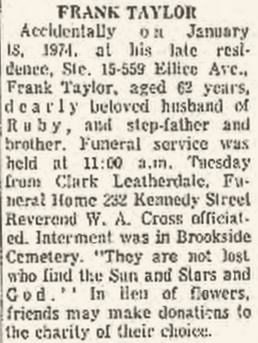 
Victim images are from obituaries and In Memoriams from various dates in the Winnipeg Free Press and Winnipeg Tribune.

Didn't get around to reading this until tonight. Sad story, good post. You obviously did your research - well done.

I was in school with a guy who lived in that block when the fire happened; he told me and his wife lost everything they had, it screwed up his university year and so on - he made it clear it was a very traumatizing event for them.

@CMP - I can imagine being there would have been terrible. The fire would be one thing but the total destruction and loss of life ...

if it wasn't for my mom Erika Kramer at the time quick thinking we would of died there too.
norman frank at nfrank2112@gmail.com

what a welcome to Canada,

I wish I met you Auntie Donna, one day I will. I love you xo