West End Dumplings - The Radio Edition  is BACK for the summer with all new episodes! Tune in at my NEW TIME, Sundays from 4 pm to 5 pm on 101.5 UMFM.

Here are the show previews and podcast links.

June 19, 2016
Kelly Hughes, formerly of Aqua Books, talks about his roots in Winnipeg's arts scene, his CKUW radio show and his new performing arts venue set to open in 2017. Preview and podcast link.

June 26, 2016
Gordon Goldsborough joins me to talk about the latest edition of the journal Manitoba History, his map of thousands of Manitoba historic sites and our dwindling number of grain elevators. Preview and podcast link.

July 3, 2016
Be a tourist in your own province this summer. A look ahead at some of Manitoba's summer festivals. Preview and podcast link.

July 17, 2016
I catch up with the ABC Railway Project, who are travelling the old Grand Trunk Pacific mainline through Manitoba, Saskatchewan and Alberta. Preview and podcast link.

August 28
I'm joined by four other hosts to talk about their shows, community radio and what keeps them going week after week. Preview and podcast link. 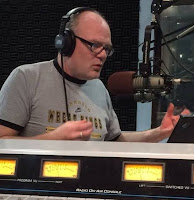