Iconic travel company Thomas Cook has closed its doors after 178 in years in business. The British-based company had footprint in countries around the world, including here in Canada until 2006.

Here's a look back at Thomas Cook's Winnipeg history. 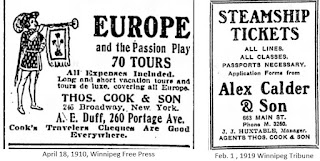 The company was created in 1841 by Leicestershire cabinet-maker Thomas Cook to organize local train excursions. It began offering tours to Europe starting with the Paris Exposition of 1855 and in the late 1860s added Egypt, North America and various other international locales. (For a more complete history of the company, see this cached view of the history section of the company's website.)

Winnipeggers wanting to book travel or tours with Thomas Cook had to go through the company's New York City office. In 1908, Cook appears to have struck a deal with the Grand Trunk Pacific Railway to be authorized ticket agents for its "Cooks Tours". Locals could buy excursions at A. E. Duff, the Grand Trunk Pacific's western travel agency with an office on Portage Avenue, or at the GTP ticket office.

In January 1909, Thomas Cook and Son opened a Canadian head office in Montreal and a network of full travel agents was established in larger cities.

A. E. Duff and the GTP continued on briefly as the agent for Thomas Cook and Sons. In 1913, the city's agents were Alloway and Champion Bank, which had a steamship travel division, and Calder's Travel Shop at 663 Main Street. 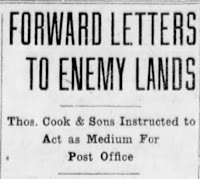 International travel was soon interrupted by the First World War. In February 1918, Canada's deputy postmaster- general announced that the post office and Thomas Cook formalized a partnership it had for delivering mail to an enemy country or one under occupation.

Writers could place their personally addressed letter along with a postal order for 25 cents into a larger envelope addressed to Thomas Cook's Canadian headquarters in Montreal. They would then be forwarded to Cook's London office which would then "undertake the transmission of such correspondence" to the nearest neutral or unoccupied country. From there, if possible, it would be inserted into the occupied country's internal postal service.

Writers were warned that their letters must be of a personal nature only with no mention of military, political or economic issues. The letters also had to be unsealed so that military censors on either end could inspect them. 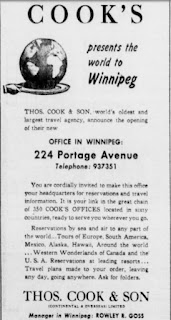 Leisure travel started up again at the end of the war and Cook enjoyed a period of prosperity only to be interrupted by a second war.

At the time, Thomas Cook and Son was still British-based but owned by Belgian interests. The British government nationalized the company and made it part of its rail system so that it couldn't be taken over by the Nazis. It was privatized again in the early 1970s.

Winnipeg got its first corporate Thomas Cook and Son travel agency in 1954. It was located at 224 Portage Avenue, the former offices of the Cunard Donaldson travel agency. A decade later it relocated to the Dayton Building at Portage and Hargrave.

Eaton's department store had its own travel division which merged with Thomas Cook Canada Ltd. in 1988. The following year, Thomas Cook had travel agencies in all four Winnipeg Eaton's stores as well as a stand-alone agency at Kenaston Village Mall that opened around 1979.

More changes came in May 1993 when Thomas Cook acquired Marlin Travel and its 265 offices across the country. This brought the total number of Canadian Thomas Cook locations to 350.

The Thomas Cook era came to an end in Canada when Transat, the parent company of Air Transat,  bought out Thomas Cook's Canadian division and its 191 locations for $8.3 million on May 1, 2006.