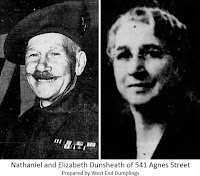 The house at 541 Agnes Street badly damaged by fire earlier this week, which was slated for demolition anyway, was once home to the Dunsheath family. Nat Dunsheath was one of the oldest Canadian soldiers in the Second World War II. Both of his daughters served in the armed forces during the war as well.

For more about 541 Agnes and the people who lived there, read my Winnipeg Places post.