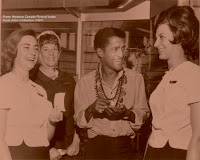 Sammy Davis Jr. was a most remarkable entertainer. He was a gifted dancer, singer, stage actor, film actor, musician and impersonator. As one writer put it, "a jack of all trades and a master of all".

Born in Harlem, N. Y. in 1925, Davis Jr. began his career as dancer at the age of three with the Will Mastin Troupe which included his father, dancer and musician Sammy Davis Sr., and his mother, Elvira (Sanchez), the chorus leader. Despite criss-crossing the U.S. numerous times over the decades on the vaudeville circuit it seems they never made it over the border to Winnipeg.

In later years, the troupe became a singing and dancing trio featuring Davis Senior, Junior and Will Mastin.

The touring Chez Paree Showcase was assembled by the legendary Chicago restaurant and night club Chez Paree through their Chez Paree Artists Inc. and was scheduled to tour "23 Midwest cities and Canada" from May 18 to June 10, 1957. The show boasted 36 performers, both black and white, including Ted Fio Rito (the club's house band leader) and orchestra, comedienne Tulara Lee, the Dancing Dyerettes and the Will Mastin Trio.

By this time, Davis was already making a name as a solo performer though multiple television appearances, on Broadway (Mr. Wonderful, which included the Trio in the cast), and the 1954 album, Starring Sammy Davis Jr.. Still, he never forgot his roots and made time to appear with the Trio. (In fact, even after the Trio was retired he continued to split his salary three ways with Davis Sr. and Mastin until 1970, which included his lucrative Rat Pack years.)

Davis Jr.'s manager told media at the time that he requested to go on he Showcase as it allow him to entertain fans in some of the smaller communities that he could no longer play in due to his rising success. 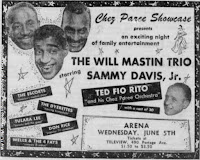 The Showcase was an entertainment format that had pretty much run its course more than a decade earlier with the end of Vaudeville and travelling musical revue shows and audiences didn't seem o keen to revive it.

The tour began in Youngstown, Ohio where ticket sales were a flop. It also made it to Columbus, Ohio where a KKK cross burning the same night, not directly related to the show, soured he proceedings. After Winnipeg on June 5, the show picked up again in Madison, Wisconsin three days later.

According to the June 4, 1957 edition of Variety magazine the sluggish ticket sales caused some cities to cancel their dates, including Fort Wayne and South Bend, Indiana. Other cities were hastily added to take their place. As a result, it is hard to tell if the show actually played in some of the originally scheduled cities like Detroit, Minneapolis, Indianapolis, Youngstown, Ohio, and Rockford, Illinois. 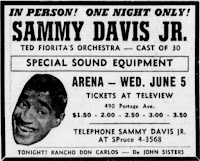 Variety erroneously reported that Winnipeg was one of the cities that had cancelled. Despite slow ticket sales, local promoter Charlie Mazzone pushed ahead. The owner of Rancho Don Carlos dinner club was said to have invested $13,000 to bring the show to town and he wasn't about to lose it.

The issue with slow ticket sales here, many felt, was bad publicity surrounding the Winnipeg Arena.

The Saturday before the Showcase was to take the stage another musical revue headlined by Count Basie, Sarah Vaughan and Billy Eckstine was in town. The Winnipeg Arena's regular sports sound system with its speakers embedded up in the rafters of the old barn was used and the result was 3,000 or so disgruntled fans who could not hear the music.

The bad sound was panned on the front page of the newspapers and reviewers and fans were in agreement that people should never spend money to see a concert at the Winnipeg Arena. 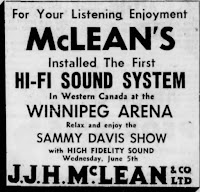 To counter the bad publicity from the week before, the McLean ads ran adjacent to ads for the show and a banner "Special Sound System" was added to the Showcase's advertising directly above Davis Jr.'s head.

Another attempt to increase ticket sales could be seen in the way the show was advertised. As it got closer, Showcase Chez Paree ads gave way to the Will Mastin Trio. In the week before the show some ads ran showing just Davis Jr.'s face with a telephone number. ("Spruce 4-3568" appears to have been a switchboard service used mainly by real estate agents.)

In the end, less than 3,000 tickets priced from $1.50 to $3.50 were sold. Even if everyone paid top dollar, it is clear that Mazzone lost thousands on the venture.

Excerpts of the program for the Winnipeg show, June 5, 1957 (source)

The Showcase was divided into two 90-minute halves. The first was made up of short sets by the various singers, musicians, dancers, comedians and an acrobatic act. The Tribune reviewer, "J. H.", called it slow and noted that "dozens" could be seen leaving the Arena's hall part way through. The Free Press' Frank Morriss dedicated just three sentences of his review to he first half.

The person the reviewers and fans were there to see, of course, was Sammy Davis Jr. who took up the final 90 minutes.

Davis Jr. opened the show with Something's Gotta Give. Other songs included Begin the Beguine and Love Me or Leave Me. He then did a dance and comedy set with Mastin and Davis. Sr.. During the orchestral set he played solos on the drums, bongos and trumpet. The show ended on a lighter note with his spot-on celebrity, (both reviewers agreed that his Elvis Presley brought the house down.)

J. H. concluded, “Sammy Davis Jr. held a Winnipeg arena audience spellbound for the last 90 minutes with… exhibitions of talent that is one of the greatest today in show biz.”

Frank Morriss wrote,  "For anyone to take the cavernous Arena, as Sammy did, and turn it into a drawing room is a feat that only great entertainers can accomplish.... Sammy Davis Jr. has been called 'Mr. Wonderful'. That, in view of what happened at the Arena Wednesday night, is a modest statement."

As for the arena's sound system, it required tinkering between acts in the first half but was working well for the second. When there was a brief crackle of static on Davis Jr.'s portable mic he quipped, "Wouldn’t you know it, I would get electrocuted just because I’m the only guy they could get to try out the new sound system. Frankly, I think I sounds good here. What do you think?” to which the audience responded with applause.

That, it seems, is the only time Davis Jr. played in Winnipeg.

UPDATE: Actually, there was one other time Davis Jr. visited Winnipeg: September 20, 1967. It was when his 707 from London, where he was working on the film Salt and Pepper, to Los Angeles stopped at Winnipeg International Airport for a refueling stop. (That is when the above photo was taken showing Mrs. D.E. Belog, Mrs. S. L. Gratton and Lorna St, Marie.)

Tribune reporter Herb Legg and photographer Hugh Allan happened to be here. When he saw the men, Davis Jr. went up to introduce himself, “Hi, I’m Sammy Davis Jr.”.

The entertainer spent only about 15 minutes at the airport but it was enough time to sign about about 30 autographs and buy some magazines at the gift shop.

Legg asked Davis Jr. about his attire, a bright orange shirt and ornate wooden necklace, to which he replied, “I’ve started a campaign to do away with ties. The necklace? That’s love, man.”

Asked if he would come back to Winnipeg, Davis Jr. said, “I like working in Canada and look forward to coming back to Winnipeg soon. I’ve worked here before and it is great.” He said that as since his career took off he had less time to fit in places, lamenting that he had missed Expo 67 in Montreal. “You just don’t have time to do what you want. It’s not like when you’re coming up and can take anything….”

After his re-boarding announcement the plane’s pilot stopped and asked for an autograph, saying “My wife’s a big fan of yours and she wouldn’t forgive me if I didn’t get one". While signing, Davis Jr. quipped, “Thank you very much. I wish you liked me.”

Ironically, his stop came less than 24 hours before the Charlie Mazzone's Rancho Don Carlos burned to the ground. Both items appeared on the front page, though the June connection between the two men was not made.

Davis Jr. on the CBC:

In July 1959, he hosted his own edition of CBC's Parade, a half hour arts show. It was a solo opportunity not yet afforded to him by networks in the United States. The recording gives a sense of what concert goers at the Winnipeg Arena would have been treated to. (More Sammy Davis Jr. on Canadian TV here and here.)

This was a joy to read, Christian. Appreciate all the research!

Anon 2, I will keep checking on that. I did sweeps of various search words through the Trib and Free Press and couldn't find an article about a return, but I am sure one day I will be researching something else form the period and stumble across an article about another show and will add it here.

I have added one return trip already. The addendum above is about a refueling stop three months after his show, which is when that Ted Allan picture was taken.

Yes, he was here again - late 60's. I took my Mom to see him and I'm fairly certain it was at the Concert Hall. I would not have taken my Mom to the Arena! lol I suppose it could have been at the pre-Concert Hall Auditorium but I don't think so. He was fantastic!

Definitely the Concert Hall. Pretty sure he did the Candy Man song, if that helps to date his visit...

It was not at the concert hall. It was at the old playhouse.
My mom took me there too.
I was looking it up, they said he wasn't here then, and I remember it vividly.

I agree, definitely the Concert hall. I remember standing outside waiting to shake his hand as he left the concert hall. Someone asked him if he got any golf in while he was there, but can't remember his answer.
We moved to Winnipeg in 1967, so my best guess is between 67 and 74.