To commemorate the 100th anniversary of the start of the First World War, I am working on a series of blog posts and radio shows that will remember some of the Manitobans who died in action. For more about this project and links to other posts follow this link.

The family first appears in the Winnipeg Henderson Directory of 1912 as homeowners at 407 Victor Street. Edward is listed as a plate fitter the C. P. R. at the Weston Shops. In 1914, they moved to 465 Lipton Street and in 1915 to 472 Lipton Street.

During this time, Mulhearn's brother, Albert S., also lived with them. He was at first a truck mechanic at the CNR shops and would go on to have a forty year career with that railway.

William Mulhearn spent ten years with the 1st Gloucestershire Royal Engineers (Volunteers) in his home country and during the First World War enlisted in with the Canadian Engineers on March 6, 1916. He arrived in England on May 29, 1916 aboard the R M S Baltic and was transferred to the 4th Division of the Canadian Engineers as a Sapper. They left for France on August 12, 1916.

On November 30, 1916, Mulhearn was "slightly wounded" and spent a day in hospital before returning to duty. In August 1917, he came down with trench fever and was again hospitalized.

By October 1917, Mulhearn was with the 10th Field Company - Canadian Engineers near Passchendaele, Belgium reinforcing a wall when a shell landed nearby. It killed Mulhearn and Sapper T. V. G. Smith, a Royal Bank clerk from Vancouver. (For background on what Mulhearn's unit was doing there, see: William Mulhearn of Winnipeg - Perspectives on the Front.)

William Edward Mulhearn is buried at the Ypres Reservoir Cemetery in France and is commemorated on the Cheltenham War Memorial in Cheltenham, England and the Soldiers' Relatives / Next of Kin Monument in Winnipeg.

The news was devastating for Elsie who was left widowed with five small children to raise. Even the Winnipeg Tribune took the unusual step of publishing a follow-up photograph of the Mulhearns taken shortly before William left for the war noting her plight. (See above)

In late 1919 or early 1920, the family moved again; this time to 541 Banning Street, (472 Lipton appears to have been a rental property with numerous rooms for rent - a type of move that was common for families before the "man of the house" went off to war.) 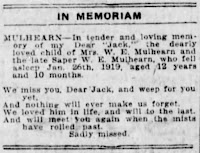 Elsie's pain did not end with the death of her husband.

Elsie never remarried and her In Memoriams for both her husband and Jack appeared periodically in newspapers into the 1950s.

By the time the family moved to Banning Street, William ("Bill") was old enough to work as a clerk at Atlas Assurance Company, then at the Winnipeg Tribune newspaper. He eventually went on to have a 30-year career with Weston's Bakery.

Bill was best known around town as a percussionist. He played the drums, marimbaphone and xylophone in bands and orchestras from the 1920s into the 1950s such as the Royal Canadian Legion Band, the PPCLI Reserves Band (in which he held the rank Band Sargent Major), and he was member of the fledgling Winnipeg Symphony Orchestra. 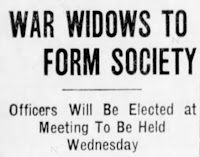 
Bill became involved with the War Widows and Widowed Mothers Association in the early 1920s.

This organization was formed at a meeting at the Odd Fellows Temple in 1919 by a group of women who recognized each other from attending various ceremonies and homecomings. They decided to band together in a formal group to comfort and support each other.

Bill acted as the group's musical director, arranging concerts and other shows to entertain members and to raise funds for the organization.

Elsie's children were grown by the early 1930s and her name began to appear in articles about the War Widows and Widowed Mothers Association.

In 1933, she was elected its vice-president and helped organize and host events for members, such as picture shows, children's concerts and picnics. The Banning Street home was the site of numerous tea parties and executive meetings.

The group's work became more daunting when a new war began and created a new generation of war widows and widowed mothers. Intermixed with social events were drives for women's clothes and baby supplies. Elsie was elected president in 1942 and spent most of the remainder of the war in that role.

Though the group continued on into the mid-1950s, with Elsie serving at least two terms as president, the War Widows and Widowed Mothers Association's role was not as prominent as it had been after the First World War. There were new organizations that took more of a centre stage.

Elsie, who was also a member of St. Matthews Anglican Church, died at her Banning Street home on September 21, 1963. She was 86 years old.