The Videon Weather Channel is back !

Thanks to Brandon Martel and Craig Midwinter, a piece of Winnipeg broadcasting history has been resurrected.

For those of you not from Winnipeg, or too young to remember, the weather channel is an old, familiar friend to a couple of generations of Winnipeg cable subscribers.

As seen above, it was a pretty simple concept: a channel that broadcast 24-7 text-based weather information in a series of screens, sixteen of them at the time of its launch, each appearing for about 30 seconds.It also displayed the time to the second.

Local and regional temperatures and the local conditions and forecast appeared most frequently in the loop. They would be followed by screens showing national, continental, international and vacation hotspot temperatures, monthly precipitation totals, record highs and lows for the day, and, in later years, windchill or UV indexes.

It may not seem like a big deal today, but before 24-hour news, the Weather Network, or the internet, this was instant access to vital information at the flip of a dial. It determined when you left for the bus, what you wore to school or work that day, or whether the family was going to take a day trip to Gimli or not. 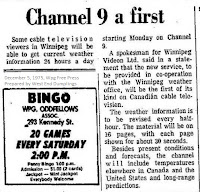 A partnership between Videon Cable, the cable TV provider west of the Red River, and the Winnipeg Weather Office of Environment Canada, the weather channel as we know it debuted on December 8, 1975. It was believed to be the first such channel in the country. (It is unclear if a similar partnership popped up in other cities or if this was unique to Videon.)

It should be noted that Videon did have some sort of text weather service when it launched cable TV in Winnipeg on August 14, 1968 in St. Norbert. It referred to it as a "time - weather service" on channel 13. The above article from December 1975 indicates that what was launched that day was something new, not an update of an existing service.

The local forecast portion was written by the weather office and had to fit into eight lines of text, which made it tricky on a day with changing weather.

Soon after its launch, the channel was picked up by Greater Winnipeg Cablevision which served the city east of the Red River. 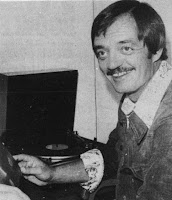 The addition of background music to the channel came on January 1, 1979 and was a game changer.

The man responsible for programming the music was CKY personality Bob Burns. The one-time Teen Dance Party host had moved to the production side of things with a company called Emm-Cee Productions, (a subsidiary of Moffatt Communications, as was Videon.)

As Christmas neared, he curated a 24-7 selection of holiday music. He joked with Tribune columnist Gene Telpner in 1979, "It's one of the toughest selection tasks I've even undertaken, a mixture of just about every Christmas song ever recorded."

It is unclear when Burns' work ended and streaming began, which tended to rely more heavily on Muzak-esque orchestral numbers.

The addition of music made the station a friendly source of background noise.

It was the soundtrack for family get-togethers and Christmas dinners or something to hum along to in a waiting room. (I used to work at a hospital for the department in charge of waiting room televisions - most had the weather channel permanently burned into their screens.)

If there was nothing on television - which often happened in a 13-channel universe - the weather channel was many people's default station. Sort of like a pre-computer era screen saver.

Generations of technology came and went, but for whatever reason the weather channel did not upgrade until the very end of the century. Its simpleness and old-school look became part of its charm.

In a 1999 Free Press article about the channel and an impending move, a Videon spokesperson said that their internal research showed that 78 per cent of their 140,000 cable customers tuned into the channel at least once a day.

Change finally came on September 1, 1999 when Videon moved the weather channel from its basic cable package channel 9 to channel 51. It said that it needed the room on the lower end of the dial dial for additional television channels.

The new weather channel threw highway conditions and airport arrival / departure screens into the mix. The response was thousands of calls a day to Videon's switchboard to complain.

Shaw, which had acquired Greater Winnipeg Cablevision, bought out Videon in 2001 and soon after relaunched the channel. They chose to revert back to same basic format as the 1975 version, just changing the colours to their corporation's blue and white.

The weather channel can still be seen on channel 48.

I read that the original weather channel had a camera on a track that went from monitor to monitor with various weather information. I wonder if there's any photos or videos of this.