The home that once stood at 17 Harvard Avenue in Crescentwood was recently demolished, to the chagrin of many of its neighbours. The plan is for a new, single-family home to go in its place.

Though it is gone, before it is forgotten here is a look back at some of the lives lived there. 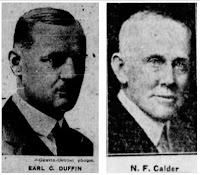 The two men were owners of the pioneering photography firm Duffin and Company, created in 1873 by Simon Duffin, (also see.). At first, it operated mainly has a photography studio and sold postcards and prints but the business evolved into a camera and photo accessory store.

By the time the house was built, Simon was company president but its operation fell to his son, Earl, as vice-president, and Calder, the manager.

Image source
Calder was an Ontario-born businessman who came to Winnipeg ca. 1894 and opened a grocery business. He was married to Simon Duffin's daughter, Josie, though she died during childbirth in 1903 and the son died a couple of years later.

By the time the house was built, he had remarried and had two small children. 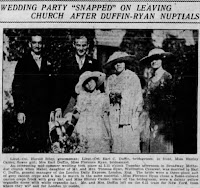 In December 1914, Duffin enlisted and by the end of the war had attained the rank of Lieutenant Colonel. He remained in England after the war and became the general manager of the London Daily Express newspaper.

Duffin returned to Winnipeg in the summer of 1921 to wed Mabel Ryan, daughter of Thomas Ryan, of the footwear company fortune, and the two returned to England.

During World War II, Mrs. Duffin and their child returned to Winnipeg as "War Visitors" and went back to England when the hostilities were over.

For most of its existence, Duffin and Company was located in what is known as the Duffin Block at Main Street at Bannatyne, though by the 1920s it had relocated at 472 Portage Avenue and had another store in Calgary. It was a leading retailer of Kodak cameras and accessories.

In 1926, with Calder in failing health, he sold the stores to Kodak Eastman Stores Ltd.

Calder died in August 1927. is funeral was held at 17 Harvard Avenue. 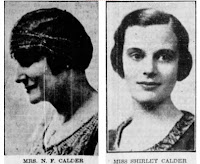 Calder and daughter Shirley, a clerk at the Bank of Montreal, continued to live at the home until 193there together, she was a clerk at bank of Montreal. In 1934 she married David C Dingwall of the D W Dingwall jewellery family.

Mrs. Calder was a socialite and 17 Harvard was home to countless teas, fundraisers and otehr social gatherings over the decades. She continued to live at the home until 1941.

In the late 1930s, when Calder wintered away from Winnipeg, John D. Hopper, Consul General to the United States, and daughter Virginia, would move into the home for the season.

The next residents were newlyweds Glen and Margaret (Daisy) Pierce and family. They created a formal, 4 room suite in the house with its own entrance, so there were often lodgers living with them.

Glen W. Pierce attended Kelvin High School and showed himself to be a musical prodigy. He won numerous awards and scholarships as a student at the University of Manitoba in the 1930s and continued his studies in piano at the Royal Academy of London and in opera and conducting at the Julliard School of Music in New York.

At the time they moved into the house, Pierce was a music teacher at Hugh John Macdonald School. He performed at recitals and was conductor of the University of Manitoba's choral society and its symphony orchestra.

Margaret "Daisy" Forbes was born in Northern Ireland and arrived in Canada with her family when she was around 10-years-old. She attended St. John's High school where she was active in theatre and musicals.

After school, she became a secretary for Winnipeg School Division and while acting as a substitute teacher at Lord Selkirk School, met Glen Pierce.

She assisted Glen on many of his musical projects and he once referred to her in a tribune article as his greatest critic because of her background in music.

The Pierces had four children, two sons and two daughters.

In 1947, Pierce began a 19-year teaching career at Daniel McIntyre Collegiate Institute, turning its music program into one of the best in the city. They made recordings, sang with the WSO and had concerts broadcast on local and national radio. A highlight was taking the 68-member school choir to Wales in 1957 to perform at an international music festival. They placed second for mixed choirs.

He left in 1966 to become the director of music for Winnipeg public schools. 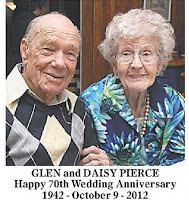 Glen Pierce retired in 1975. Soon after, the couple moved to Florida.

Need To Increase Your ClickBank Banner Traffic And Commissions?