To commemorate the 100th anniversary of the start of the First World War, I am working on a series of blog posts and radio shows that will look back at some of the Manitobans who died in action. For more about this project and links to other posts, follow this link.

John Robert Ivers was born and raised in the Ottawa area. He and wife Lucie Christina Ivers likely married in 1907 and came to Winnipeg in 1912 or 1913, settling initially at the Investor Apartments on Sherbrook Street near Notre Dame Avenue. 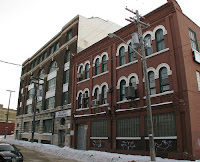 Ivers worked as a shipper for Smart-Woods Co., a canvas bag manufacturer on Alexander Avenue. He was  also a member of the 90th Royal Winnipeg Rifles militia before enlisting with them on October 2, 1915.

By that time he and Lucie lived at the Tremont Apartments on Sherbrook Street. After he was sent overseas in May 1916 aboard the R.M.S. Olympic she moved to the Tetlow Apartments on Wellington Street, then to the Ottawa area in 1917.

Ivers himself moved around while overseas. He was taken on strength by the 23rd Reserve Battalion a month after arriving in England. In April 1917, he transferred to the 24th Battalion Canadian Infantry (Quebec Regiment) - even taking a demotion in rank and pay in the hopes of seeing action at the front.

Ivers did see the action he was seeking.

He was wounded in a gas attack in July 1917 and spent a week in hospital before being sent back to Canada to recover. This is presumably why Lucie spent time in Ottawa in in 1917.

Ivers recovered and by January 1918 was back in action. Soon after he returned he was felled by trench fever and spent more time in hospital.

On April 10, 1918 Ivers was killed in action. His Circumstances of Death record notes: "On the 10th of April, 1918, the enemy opened up heavy shell fire on the back areas where his Company was billeted, and he sustained serious wounds in the head and left leg, right thigh, stomach and side.  He received immediate attention and was taken to No. 3 Canadian Stationary Hospital, Doullens, but succumbed to his injuries the same day."

Ivers was 33 years old and is buried at Doullens Communal Cemetery Extension No.1.

As for Lucie, she stayed in Winnipeg for a time. She lived at the Tetlow Apartments until 1920 and in 1921 is listed as the homeowner of 592 Bannerman Avenue. The following year she disappears from the Winnipeg street directory listings.