To commemorate the 100th anniversary of the start of the First World War, I am working on a series of blog posts that will look at 100 Manitobans who died in action. For more about this project and links to other soldiers, follow this link.

Allan Charles Wingood was born in Hamilton, Bermuda in 1887 and attended Warwick Academy, the oldest school in Bermuda. He came to Winnipeg in March 1907, the attraction likely being that he had an aunt, a Mrs. R. C. McDonald, who lived here.

Wingood, an accountant by trade, first settled at a boarding house on Hargrave Street and got a job with G F and J Galt as a clerk, then as a travelling salesman.

The Galts set up a food wholesaling company in Winnipeg in the 1890s and a few years later expanded their offerings into food production, creating the Blue Ribbon line of basic household grocery items like coffee, tea and extracts. 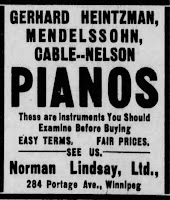 By 1911, Wingood partnered with Charles D. Lindsay to open Lindsay and Wingood phonograph store at 284 Portage Avenue. It was a small section of the musical instrument store of Norman J. Lindsay, Charles' older brother.

The store was located at 284 Portage Avenue, the same building that housed the Lyceum Theatre, demolished in 1968 for the North Star Inn, now the Radisson Hotel.

By 1914, things were looking good for the young accountant.

The record store closed but he now had a job as a clerk with the Winnipeg office of McDougall and Cowan. Based in Montreal, it Canada's largest brokerage house with offices across the country.

Their local offices were located at 438 Main Street, an address that no longer exists but it was likely the office section of the now demolished Dominion Bank Building at Main Street and McDermot Avenue. 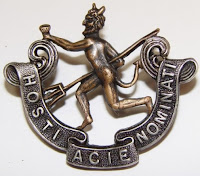 Wingood served in the military reserves in Bermuda, with the Bermuda Volunteer Rifles Corps (BVRC) until March 1907, then as a lieutenant with the 100th Regiment - Winnipeg Grenadiers militia from 1910 - 1913.

In September 1914, he enlisted and later went overseas with the 6th Battalion of the  Fort Garry Horse under Lt.-Col. James Dennistoun. While in England, he was transferred to the 8th Battalion Canadian Infantry (Manitoba Regiment) and in May 1915 attained the rank of captain after showing "gallant and distinguished conduct".

After Courcelette (City of Vancouver Archives)

In May 2016, Wingood was reported as wounded but recovered and returned to the front.

On September 26, 1916, Wingood was killed in action at Courcelette, France during the Battle of the Somme. (Also see.) He was 29 years old.

Details of his death are not clear, though it appears his remains were never identified.

He is commemorated on the Vimy Memorial in Calais, France, the Next of Kin / Soldiers' Relatives monument in Winnipeg, the Bermuda War Memorial and the Warwick Academy war memorial.

Information if you have any. I am fascinated with this topic and your post has been one of the best I have read. BC marijuana dispensaries

Hello, an amazing Information dude. Thanks for sharing this nice information with us. Glucosamine Singapore