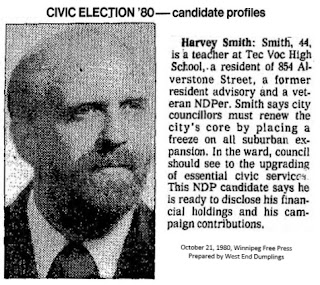 Harvey Smith entered civic politics in 1980 when he beat he beat Geoff Dixon, a former councillor and the ICEC candidate for Sargent Park.

Though he may have slowed in his later years on council, most people will remember him as a tireless fighter for the inner city and for the underdog. 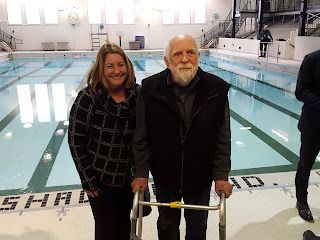 One of the many causes that he fought for was to keep the Sherbrook Pool open.

The last time I saw him was in early January 2017 at its grand reopening after a four year closure.  It was nice that he was able to see the festivities.

Harvey was a character. We first met when the Issac Brock Residents Association was formed int the 1980's and I was elected President. We fought to keep Omand's Creek clean, have the U of W field house put somewhere else and many more area needs. Our friendship was always fun and he and I saw a lot of each other in those days. He supported the Friends of the Met in the 1990's when we worked to save the Metropolitan Theatre from the wrecking ball and as many know he was a tireless pain in the ass at City Hall working for the people that elected him year after year. You don't get re=elected on your good looks as he proved. You could call him any time day or night and he would respond as soon as he could. I am proud to call him my friend as he is only gone in body, not in spirit. He is an example that all can set by. I last saw him in January of 2017 at one of my Presentaions and when I asked him if he remembered me since we had not seen each other for a few years, he said the typical. "How could I forget you." The same goes for me Harvey. Many cherished thoughts. Greg Agnew

Thanks, Greg, for adding this !

I will only(ever) be able to refer to this Gentleman as "Mr.Smith". Harvey made an indelible impression on many a young-soul as a "conniver" and taught us to question authority.

Blessed with charm and wit, he was able to talk his way into and out of almost any situation...

Every conversation with "Mr. Smith" was Personal and he made you feel like you were the only one in the room with him(despite being in a crowd). He was a special kind of guy.