A look back at Winnipeg's Mitchell Fabrics

Earlier this week, Mitchell Fabrics at 637 Main Street at Logan Avenue announced that it was closing after 70 years in business at the same location. 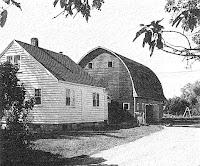 Mendel Berl Mitchell was born in Russia in 1907 and came to Manitoba with his family in 1921, settling in Reinland, Manitoba, near Winkler. His father, Monty, was a peddler who started a store in the home the family rented. (The photo above is of the site in Reinland, though the house was rebuilt after the Mitchells relocated to Winnipeg ca. 1947.)

After serving in World War II, Mitchell settled in Winnipeg in 1946 at 488 Flora Avenue. In the Henderson Directories of the period the house is listed as being owned by Leon Mitchell, a CPR employee. Around the same time, other Mitchells, including Benjamin, Flora, Beril and his wife Ruth also lived there. 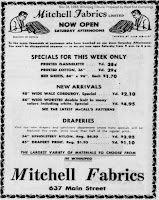 Mitchell started working for Mindess, Gilfix and Malt, wholesale jobbers, (clothing and fabrics), a company that dated back to 1906. He became a partner with Frank Gilfix in 1947 and the store was renamed Mitchell and Gilfix.

Mitchell's father would join him, both working at the store and living at 488 Flora.

It is unclear what happened to Frank Gilfix, but around 1960 the store was renamed Mitchell Fabrics.

It never changed locations, just expanded over the decades to take up more retail units within the block until it filled the entire 10,000 square foot building plus basement.

Mitchell died on September 14, 1981 at Misericordia Hospital at the age of 74. It appears that he never married.

His obituary reads, in part: “Mendel was the creative and managing force behind Mitchell Fabrics from its beginning till his death. His ingenuity and imagination are reflected in the unique store which Mitchell Fabrics has become.”

The store has remained a family affair.

David and Ruth Ann (Mitchell) Borenstein married in 1965. The two co-owned and worked together at the store nearly 30 years.

Harry B. Mitchell, who owned and operated Western Garment Manufacturing Ltd from 1936 to 1971, worked at the store for a number of years after his retirement.

In the mid-1980s, Mendel Mitchell's niece, Paula Mitchell, began working at the store and is a current co-owner and the public face of the company. 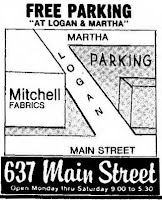 This location, I believe, was the Oak Theatre in the late 1950s-60s. The assertion Mitchell Fabrics has been there for 70 years is off a bit, methinks.

No, I'm not off. The Bon Accord Building had four spaces on the main floor. From the mid-1940s to end of the 50s they were (from left to right) the Oak Theatre, Mitchell and Gilfix (there's an ad for it from the 1950s and the 1960s in the article above), New Main Cafe, J. Mindess and Co. and, possibly, Union Gospel Mission.

As I mention above, after 1960 and changing its name, they "expanded over the decades to take up more retail units within the block until it filled the entire 10,000 square foot building." This includes the Oak, which disappears from street directories in 1963.

It must have been a pretty small affair as before becoming a theatre it was a clothing store.