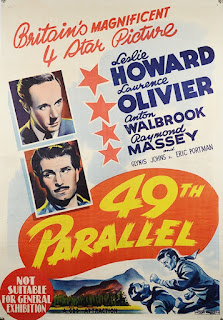 A few years back I blogged about the British feature film 49th Parallel, (1941).

Set in Manitoba, it begins with a Nazi U-boat surfacing in Hudson Bay and follow its crew's trek towards the American border, their ultimate destination. Despite a cast that included the likes of Leslie Howard, Laurence Olivier and Raymond Massey, the low budget affair is now written off as little more than a cheap, World War II propaganda film.

Director Michael Powell filmed some scenes here in Manitoba. While doing research on actress Carla Lehmann, I found that the Winnipeg-shot scenes she was brought in for ended up on the cutting room floor. 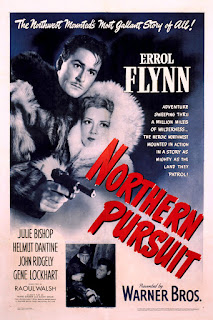 I was surprised one night to find that there was a SECOND World War II-era film that started with the exact same premise! It's 1943 Warner Brother release Northern Pursuit, starring Errol Flynn and Julie Bishop.

The film begins with a German U-boat surfacing in Hudson Bay and follows the journey of its crew as they make their way through an oddly mountainous northern Manitoba to get to the U.S. border. The trek is interrupted by officers at an RCMP outpost at the fictional town of Bear Lake, Manitoba.

Flynn, who plays a Canadian Mountie of German heritage, comes under suspicion when the prisoner they've captured is allowed to escape. The confrontation about his actions leads him to strike a fellow officer, landing him at a disciplinary hearing in Winnipeg.

Flynn's character is suspended and returns to Bear Lake to marry his sweetheart, (after "the longest engagement in Manitoba"). He also crosses paths with the escapee and the rest of his crew.

One major difference between the two films is that, unlike 49th Parallel, the actors never set foot in Manitoba. It was filmed at a Warner Brothers sound stage in Hollywood and Sun Valley, Idaho was used for some of the outdoor scenes.

Even the stock footage of city skyline used was not that of Winnipeg. Oh well, at least they spelled it correctly. 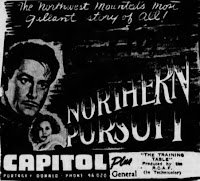 Locally, the film had its sneak peek preview at the Uptown Theatre on January 1, 1944. It returned to the Capitol on January 14th for a short feature run. In the summer of 1944 it returned as a second-run feature at neighbourhood cinemas.

The New York Times said said Warner Brothers: "told the story sloppily and with little confidence", concluding that: "Northern Pursuit is an outdoor picture which seems to have been written and played in an overheated room." It also makes reference to the film "aping" the opening sequence of 49th Parallel, referring to the earlier film by its U.S. release title "The Invaders".

Locally, Winnipeg Tribune reviewer Ben Lepkin ripped into it, writing: “Never within the range of memory has there been a film so replete with clichéd situations and hackneyed dialogue and never has it seemed to matter so little.” (Jan. 15, 1944, Winnipeg Tribune)

It was odd reading such a disparaging local review. My experience is that movie or play reviews of the era often pulled their punches, likely not wanting to anger theatre owners who were big advertisers.

To me, it wasn't that bad for a wartime propaganda film and a film set in Canada by a U.S. studio. It certainly caused less eye-rolls than 49th Parallel did!