Thomas Gibson Auld was born in 1891 in Glasgow, Scotland. He likely left his homeland for North America in 1914.

He eventually came to Winnipeg and settled at a rooming home at 185 Smith Street. Now demolished, at the time it was a rooming house located a block away from Eatons. He listed his occupation as "clerk" but it is unclear where he worked.

Back home, Auld served for 3 years with the Queen’s Own Royal Glasgow Yeomanry militia so when World War I began, he was eager to return to join the action.

On December 18, 1914, a month shy of his 23rd birthday and likely just months after arriving in the city, Auld enlisted with the 43rd Battalion (Cameron Highlanders) in Winnipeg. Initially he was declared unfit for duty as ringworm was found in one of his shoulders at his medical inspection. He was cleared on December 29th after treatment. 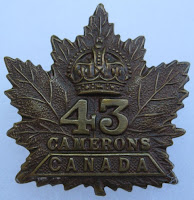 Auld arrived in England on June 10, 1915 and quickly moved up the ranks. He was promoted from Private to Lance Corporal three months later and by December was a Corporal. In February 2016, his battalion embarked for France.

On June 15, 1916 he was shot in the chest and taken to the No. 10 Stationary Hospital at St. Omer, France. He died of his wounds the following day.

His service file indicates that on July 7an application for his promotion to Sergeant had been approved. By this time, of course, he was already dead. He received the promotion posthumously.