The end for Noble Court? 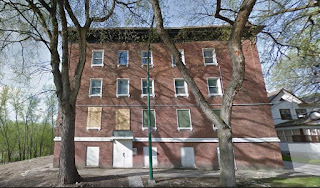 The apartment building at 126 Alfred Street was severely damaged by fire overnight. The building had been vacant since 2008 or 2009.

According to news accounts the damage was extensive, which means the building may be torn down. Before it slips away, I thought I would look back at its history. 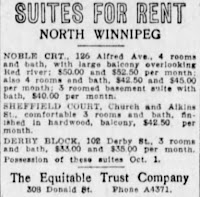 Built in 1914, it was known as Noble Court. I couldn't find information about the original owner or cost. Ads for the sale of the building in 1984 say it had 26 suites.

With a beautiful location along the river, it appears to have been a popular building, not advertising suites for rent as often as many similar buildings did. Its first classified ads describe it as “The finest four room suites in the North end, finished in quarter oak, maple floors, private and public verandas.”

Though Noble Court's suites did appear to rent at a premium compared to other apartments in the area, it was still very much a middle class apartment, housing teachers, drivers, clerks and accountants.

It doesn't appear that any major fires or crimes took place there.

Here are a few of the lives lived at 126 Alfred. 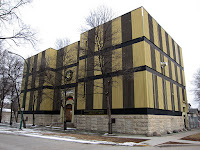 Lemuel Levitt of Olgopol, Ukraine who came to Winnipeg around 1924. Soon after he was principal of the Talmud Torah (Hebrew Free School) in Winnipeg for a number of years.

At the time there were two, the main one on Charles Street (which, ironically, became the German Club of Winnipeg in 1951) and a satellite School on Andrews Street. 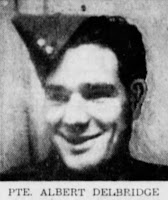 During World War II it was the home of the parents of William and Albert Delbridge, who both served.

Private Albert Delbridge was one of hundreds of Winnipeg Grenadiers taken hostage by the Japanese at the disastrous Battle of Hong Kong. Between January 1942 to September 1945, he was shuttled around to three POW camps and two work camps. 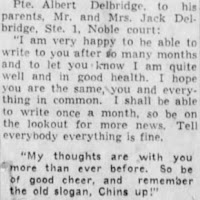 Initially, the Delbridges did not know the fate of their son. It was not until August that dozens of letters from Grenadier POWs came, thanks to the Red Cross. He encouraged them to keep their "chins up."

Communications were spotty with POWs as conditions in the camps worsened. Many died due to beating, starvation and other causes.

Both of their sons survived which must have led to joyous moments at Noble Court.