Behind The Photo: Married 62 Years on Christmas Day 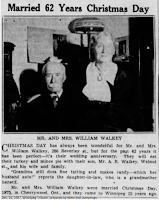 This photo appeared in the December 24, 1937 edition of the Winnipeg Tribune. It shows the Walkeys, getting ready to celebrate their 62nd wedding anniversary the following day.

William Walkey and Mary Williams were born and raised in Ontario, marrying in Cherrywood on Christmas Day, 1875. In 1890, they came to Manitoba with their four children and settled at Newdale for 22 years before moving to 286 Beverley Street in Winnipeg.

Mr. Walkey was a carpenter, blacksmith and machinist throughout his life and died in 1939 at the age of 84.

Mrs. Walkey remained active in the United Church and her community work well into her 90s. She died in 1956 at the age of 98.

They are buried together at Newdale Cemetery.