Demolition for second oldest building on U of M's Bannatyne Campus

The second oldest building on the University of Manitoba's Bannatyne campus will soon be history.

Earlier this summer a Request for Proposals for the demolition of the ca. 1920, 34,000 sq ft, 3-storey Basic Science Building was issued and the work will begin in September.

It is one of the first steps towards realizing the University of Manitoba's Bannatyne Campus Redevelopment Plan, released in 2014. Its aim is to make the campus, particularly McDermot Avenue, more inviting to students and community members as a place to hang out.

The building, according to the report, has “proven too costly to upgrade in terms of accessibility, fire protection, HVAC, and building envelope.” It recommended that it be demolished to make was for a green space plaza that will include a seating areas and possibly reuse some of the bricks from the former structure as paving stones.

The Basic Science Building was constructed between September 1920 and January 1921 as part of a larger expansion to the Medical College, the first since the institution was absorbed by the University of Manitoba three years earlier.

The funding came from a construction account previously established by the provincial government. 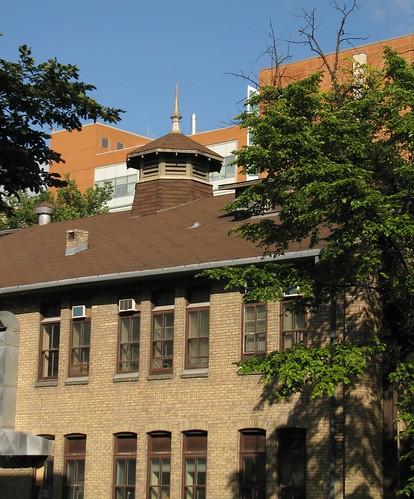 The building was designed by A. A. Stoughton, head of the U of M’s department of architecture from 1913 - 1929. The contractor was Sutherland Construction of Winnipeg.

Unlike the original medical college building and the extension that would be built the following year, this building’s exterior is clad only in local clay brick - no Tyndall stone trim or other materials. Intricate brick work and “chocolate joints”, (presumably brown mortar), however, gave the building a more intriguing facade that it might ordinarily have had.

The building initially housed the biochemistry bacteriology, physiology departments, their offices study space, a lecture hall and laboratories. It is likely because of the labs that the building’s sloping roof is outfitted with pair of cupolas for additional ventilation, (see above.) 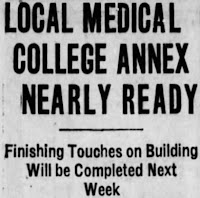 Construction began on September 27, 1920 and was completed in the first week of February 1921. This was about four weeks later than predicted, but the project remained with its $172,000 budget.

While this building was under construction, the U of M got some good news. A Rockefeller Foundation application was approved in the form of a $500,000 endowment for medical research. This wouldn't allow for capital construction, but ensured that the university had an annual source of funds with which to equip labs and fund research projects.

Buoyed by the endowment, the university speedily approved plans for the second phase of the expansion, what is now called the Pathology Building. Construction began in June 1921 on that building which is situated adjacent to the original medical college building and directly in front of the Basic Science Building.

As a result, the facade of the Basic Science Building, as seen in the above photo, only saw the light of day for less than a year.

Related:
My photo gallery of the Basic Science Building

Thanks for the fine work you do to better understand our past.