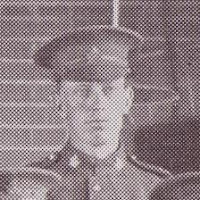 Thomas Cronely was born March 11, 1879 in Manchester, England. He married Ina Nickols and the two immigrated to Canada, the exact year is unknown.

The couple first appear in the Winnipeg Henderson Directory in 1907, at a rooming house at 393 Logan. His occupation is listed as bricklayer.

In 1910, they are the homeowners of 51 Gertie Street and Thomas is working for contractor Thomas Kelly and Sons. By this time, their family of five children had started. 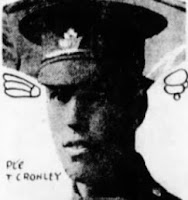 Thomas enlisted on January 10, 1916 with the 101st Battalion and while waiting to go overseas took a job as a live-in caretaker at St. Julien Apartments, 508 McMillan Avenue. After he left, Ina and the children lived briefly at the Fortune Block on Main Street, then 361 Langside Street.

He embarked for England on July 6, 1916 aboard the S.S. Olympic. Soon after their arrival, Cronley was transferred to the 17th Battalion with whom he went to France on August 27th. In the field he joined the 16th Battalion (Canadian Scottish). 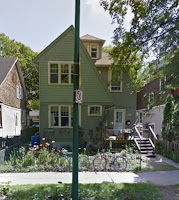 Until the end of the war, Ina continued to lived at 361 Langside, a resident-owned rooming house with about five suites. by 1920 she is living at a three-room rooming house at 159 Evanson.

It must have been a  time of great hardship for Ina. She was a widow with five children and there are no other Cronleys or Nickols listed in the Henderson Directory, from 1918 - 1920, indicating that there were likely no other family members here.

Thomas' pay records indicate that his $20 salary stopped being sent to Ina in December 1916. It is unclear what the reason was. In April 1917 a cheque for four months back pay was sent.

On January 25, 1921 Ina Cronley died at General Hospital at the age of 41. Her death and funeral notice in the Free Press and Tribune did not provide a cause of death.

It is unknown what happened to her five children.