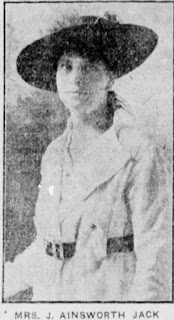 This photo appeared in the October 30, 1915 edition of the Winnipeg Tribune. It is of  Mrs. J. Ainsworth Jack of 420 Simcoe Street. She was one lucky lady as she had just won a round-trip, expenses-paid train journey to the Panama-Pacific International Exposition in San Francisco, California.


The contest was hosted by the Winnipeg Tribune for Runaway June, an American silent movie serial made up of fifteen 20-minute films. Written by  by George and Lilian Chester, it was released by Reliance Productions in 1915.

Runaway June came with a large promotion budget and tie-ins with American magazines and newspapers. Some Canadian papers were included, such as the Winnipeg Tribune. The theatres she attended was the Wonderland, located at Sargent and Maryland. 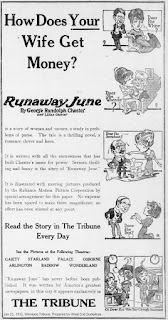 Unlike feature-length films, not a lot was revealed about the serial's story line in the newspaper coverage. People were teased to go see it. A Pittsburgh Press article hinted that: "The crux of the subject (is) the lack of understanding between man and wife on matters of finance."

Though some music from the serial has survived, it appears that the film has been lost forever.

According to Women Filmmakers in early Hollywood: "Runaway June was not a runaway success" despite the huge marketing budget. With no car chases or other real "action" that these serials were noted for, viewers did not take to it.

In a 1938 editorial page story in the Winnipeg Tribune entitled “How I became a movie critic”, author “N.B.Z.” recalled seeing the first episode at the Wonderland with friends and notes “our gang suffered and said nothing.”

After the third week, the theatre manager innocently came out to ask the audience whether they wanted the serial to continue and: "My hand shot up with hundreds of others in an overwhelming ‘No’." He notes that the following week another serial was shown instead.

The theatre must have changed its mind, or have been persuaded by the marketing campaign to continue, as the full 20 episodes appear to have been shown there between January and October 1915. Thee was a break in July due to unseasonably warm weather that kept the Wonderland shut for a couple of weeks. 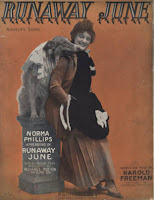 There was little follow-up about the contest and Mrs. Jack's adventures in California.

On December 14th 1905, a small item appeared in the sports page noting that Mrs. Jack, a member of the Stratchcona Curling Club, wrote to the Tribune's sports editor while on her trip to say that she was quite enjoying watching the female tennis players in action. She added that she was looking forward to getting home for the start of the curling season, stating: "California is alright for invalids, but Winnipeg weather pleases her better."

There was no mention in the article of the movie or the contest.

It's been said that any bettor needs to see this,

Watch this or quit placing bets on sports...