By the time World War I broke out, Albert C. Ross had already lived a very full life.

Born in Ontario around 1871, he came to Manitoba in 1885. He was a member of a Northwest Rebellion veterans organization, so could have come as a teenager to take part. He then settled in Winnipeg, eventually becoming a police officer. 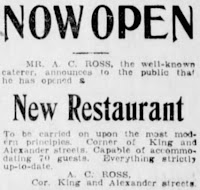 In 1903 he left the force to set up the Ross Detective Agency at 646 Main Street. His clients included the likes of the CPR and HBC, many of his cases had to do with employee theft.

A few months later he also opened the A. C. Ross restaurant at King and Alexander.

He operated both business under one roof, first on king Street then at 646 Main Street.

In April 1911 a small notice in the Winnipeg Tribune noted that A. C. Ross was seriously ill in hospital, though no further information was provided. He recovered and soon took a job as a deportation officer for the Department of Immigration, then possibly as a police officer with the Manitoba Provincial Police based in Virden.

On August 13, 1915, Ross enlisted with Brandon's 79th Battalion as a cook. When Lt. Col. Glen Campbell was forming his 107th Battalion, he selected Ross as one of his handful of officers which gave him the rank of Sergeant - Cook.

Ross left for England in September 1916 and then on to France. He was stationed in the kitchen of the battalion's field headquarters which came under fire, once being destroyed by a mortar attack.

It appears that Ross did make it home for at least one visit. In March 1916 he gave away his daughter, Ethel, at her wedding in Winnipeg.

Ross contracted influenza in France and died in a field hospital on January 16, 1918, at the age of 47. His body was returned to England and was buried at Shorncliffe Military Cemetery.

He left behind a wife, Mary, eight daughters and two sons. Four of the daughters still lived at the family home at 475 William Avenue at the time of his death.

A son in law, W. J. Lee, also with the 107th, was killed in action five months earlier.