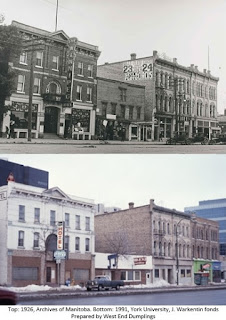 There was a little good news earlier this week for the oldest stretch of buildings left standing in Winnipeg.

The Fortune Block, Macdonald Block and Winnipeg Hotel, which were on the old Historic Buildings List, were successfully transferred to the new List of Historic Resources by the Standing Policy Committee on Property and Development, Heritage and Downtown Development  The decision still needs to be approved by EPC and city council.

The news gets better, in that there is a Sugar Daddy willing to purchase them, all if need be, to do a restoration of the Fortune Block. This, of course, does not guarantee a sale. The owners could decide to spite Pollard and sit on the buildings for another 10 years and complete the cycle of demolition by neglect.

So, news reports of the buildings being saved is a stretch, but they at least are back to having protection from outright demolition.

Aside from the owners, another player who won't be too happy is Centre Venture. No a fan of anything historic, they were pinning their hopes on lining up some new development for the site.

It's nice to see that on rare occasions buying an old building for cheap and intentionally not renovating it so that it will fall down and you can flip the land from underneath it does not always work as a business strategy. (Particularly interesting were the comments of the Fortune Block owner who went into detail about how decrepit and neglected the building is, as if he, as the owner, had nothing to do with it.)

Here's a piece I wrote in the Free Press about these three buildings last January. Each has a unique and interesting history.

- The Winnipeg, I believe, is the oldest building in the city. It was a saloon that received its liquor licence one week before the city was incorporated, back when that stretch of road was still called Garry Street. It was added onto a number of times, including a two storey addition in 1883, but from anything I have read, the original business kept on operating while the renovations took place around it, so its 1873 bones are part of the main floor.

- Alexander Macdonald, who owned the Macdonald and Fortune Blocks, was one of the city's most influential early businessmen, involved in the start-up of many businesses still around today. His own business, Macdonalds Consolidated, is also still operating.

- The Fortune Block, financed by Mark Fortune but he sold before it opened, was home to the first School for the Deaf and the first female doctor in Winnipeg.

Great article! Wouldn't Ross House and the St. B museum be older than The Winnipeg though?

You are correct, Anon. There are a few houses and churches in the city older than the Winnipeg. That's why I specified "commercial building". On that front, 1873 appears to be the oldest.