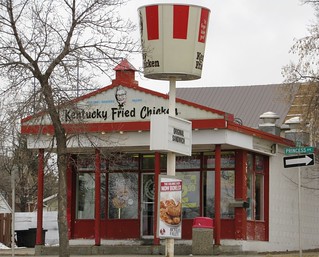 Fans of vintage architecture will be sad to hear that the very retro Kentucky Fried Chicken stand at 438 Princess Avenue and Fifth Street in Brandon, Manitoba was torn down in mid-January. 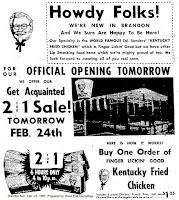 This restaurant opened in 1965 as part of the Champs Fine Foods group of Winnipeg. President Oscar Grubert and business partner Bill Goldberg purchased the franchise rights for Manitoba, Northern Ontario, North Dakota and Minnesota after a meeting with Sanders in 1957.

Unlike some other fast food restaurants or supermarkets, there is no one defining "look" for early Kentucky Fried Chicken restaurants. That's because Harland Sanders was was interested in franchising his chicken recipe and cooking equipment, not a restaurant concept.


By this time, Champs already had eight Kentucky Fried Chicken outlets operating in Winnipeg as well as finer dining options such as Pierre's and the Champs Motor Hotel, (later known as the Osborne Village Inn.)

The cost of construction and equipment for the 1,200 square foot, concrete block building with full basement was $50,000. The contractor was E. C. Higgins and Sons of Brandon, which had recently built the Salvation Army's new citadel on Princess Avenue and went on to be one of the chief firms involved in the construction of the Western Manitoba Centennial Auditorium.

Champs hired a former local sports star as its restaurant manager. Mac Beaton was a winger on the legendary 1948 - 49 Wheat Kings team that lost to the Montreal Royals in the Memorial Cup Championship Final.

His playing and coaching career took him around North America. By 1964, he and his family were residing in Penticton B.C. when he and his wife decided to return to Brandon and a home on Sixth Street. Beaton went to Winnipeg for a number of weeks of training with Champs before heading back to Brandon to start his new career. (It is unclear how long Beaton spent as manager. By 1975 it was Dale Beswitherick.)

The restaurant opened at 4 p.m. on Wednesday, February 24, 1965. In attendance was Champs' president Oscar Grubert and general operations manager Hank Piedalue. Brandon mayor Stephen A Magnacca cut the ribbon. (The above photo is from a reception held elsewhere in the city, as the restaurant was pick-up or delivery only.)

The menu included fish and chips, ribs, jumbo shrimp and burgers. Colonel Sanders' chicken, though, is what people lined up for. Around 5,000 chicken orders were processed that first evening.

Had a lot of chicken there over the years, I can remember my dad picking up a family bucket for 5 bucks, almost every pay day when we were kids snd we loved it.To bad it fell into such disrepair but with the new KFC Taco Bell on 18th street it was really no longer needed Brandon's not that big even now thanks for the history I was too young to pay attention when it opened.

Now I know why my grandma always called KFC "Champs Chicken"! One more mystery filed away.

eToro is the most recommended forex broker for beginner and advanced traders.

Thank you so much for writing such an exciting post! The success of KFC is the story of one man's dream of cooking that has catapulted into making his company one of the biggest franchises in the whole world. Isn't it one of the most inspiring stories of a self-made man? Harland Sanders is truly an amazing person! I think that his "American dream" is common to all people, but everyone views it in different ways.

This has nothing to do with the Brandon outlet, but in Winnipeg, I remember it as "Champs Kentucky Fried Chicken". There was a dine in restaurant on the corner of Maryland and (Sherbrook???) that we went to EVERY Sunday after church(always went to the church in downtown Peg on St. Mary's) GREAT story and great memories!