Manitobans, this Boxing Day take a few seconds to thank the man who campaigned for years to bring it to you: former Winnipeg Mayor and MLA Colonel Ralph Humphries Webb.


Boxing Day is a British tradition, the day after Christmas when servants or apprentices would receive a Christmas box, (gift), and time off from their master. It had developed into great sporting day in the U.K. featuring top boxing matches and premiership football games that were covered in here in wire stories in the sports pages. 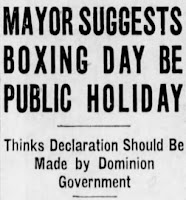 Webb first raised the issue of making the day national holiday in December 1930. It was not for tradition's sake, but because many city people went to visit family in rural areas for Christmas and, especially in the West where travel infrastructure was not as wide reaching as it was in more established parts of the country, "...a two day holiday would make it much easier for them.”

Webb noted that some workplaces, such as in the lumber industry, traditionally closed from Christmas to New Years to do an extensive inventory of their yards. (Webb ran a lumber yard for many years.)

In 1932 Webb won a seat in the provincial election and sat concurrently as mayor and MLA for Assiniboia until the December 1934 civic election. This allowed him to take his Boxing Day campaign to the next level.

On March 21, 1934, he introduced a motion in the legislature to have Manitoba declare Boxing Day a provincial holiday. It sailed through the house with no opposition and received its third reading on March 29th.

The day before the official proclamation was signed by Lieutenant Governor W. J. Tupper on December 8, 1934, Webb told the Winnipeg Tribune:  “…it is my sincere hope that the day will be universally observed as it is in the Old Country and elsewhere. It is intended largely to provide a rest for the store clerks who must necessarily be fatigued by the Christmas rush.... The idea of Boxing Day is to provide another day for mirth and general rejoicing.” 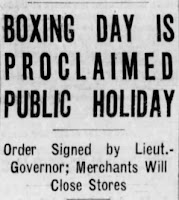 The late date of the declaration left some employers scrambling to schedule work and workers. One group of workers that were not happy were hourly employees, for whom the holiday simply meant an unpaid day. The City of Winnipeg tried to set an example for others by rescheduling its hourly workers so that they would get another day off in lieu. The railways, not covered by the provincial law, followed suit.

Webb again called on the feds to declare a national holiday so that even federal government employees, such as post office and customs workers, could also get the day of. They declined.

By this time, Webb's campaign had received national attention and dozens of other cities, especially in Saskatchewan, declared Boxing Day 1934 a civic holiday. In terms of provinces, Manitoba was the first, followed by British Columbia in 1935. 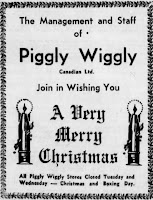 How did the first Boxing Day go?

Despite the last minute proclamation, the holiday appears to have been a success and supported by big retail and offices. This was probably thanks in part to Webb, as mayor, very publicly instructing the police department to be on the lookout for stores flouting the law.

The Tribune reported quiet streets with the odd automobile and streetcars running on a holiday schedule passing by. The Winnipeg Grain Exchange closed, putting it out of step with other North American exchanges. The fire department had their busiest day of the winter as people stayed home and lit fires to stay warm in the -20 to -30 temperatures, causing dozens of chimney fires.

Love hearing these stories that appeal to the kid in me that is perpetually asking "why."

Interesting blog! Such a contrast with what it means today. Extra time for rest and charity for those who might not have had a great Christmas!

Thanks ! I wonder what Webb would have thought about what boxing Day has become !