Teodore Zaharia was a pioneer, coming from the Galician region of Europe, present day Poland / Ukraine, in the 1890s. Son Samuel "Sam" Thomas Zaharia was born in Dauphin in February 1896.

By the 19-teens Teodore was working for the Grand Trunk Pacific railway in Rivers, while Sam worked on the family farm with his mother, brother and two sisters.


Sam came to Winnipeg and enlisted with the 100th Battalion (Winnipeg Grenadiers) on March 4, 1916, though he didn't go overseas. 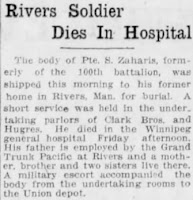 In May 1917 he contracted tuberculosis and was transferred to the Ninette Sanatorium. On August 8th he was brought to the Winnipeg General Hospital and died one week later. He was 21 years old.

A service was held at Clark Brothers funeral parlour on James Street, after which Zaharia's body was led by a military procession to Union Station. His body was sent back to Rivers where he received a military funeral at the Methodist Church.

He is buried in Rivers Cemetery and is commemorated on the Rivers War Memorial.