What is up with the Bathgate Block on Princess Street? 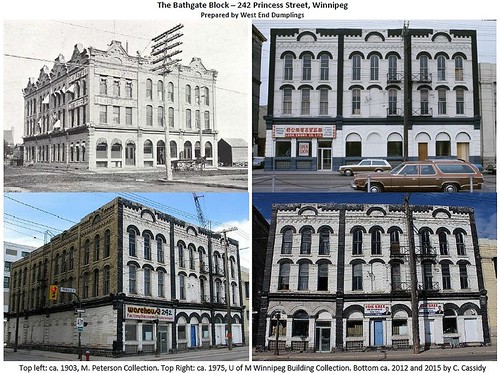 Built for businessman William Bathgate in 1882 - 83, the Bathgate Block at 242 Princess Street is one of the city's oldest commercial buildings. It is also, I believe, the last intact  work of prolific architects Barber and Barber, best known for their "gingerbread" Winnipeg city hall, (also see.)

The Chinatown area has not felt the love that the rest of the Exchange District has received during the 2000s and this is reflected in the fate of buildings such as the Confederation Block (Shanghai Restaurant), the former Salvation Army Citadel and the Bathgate Block.

Bathgate's last noticeable tenant, a discount retailer called Warehouse 242, closed around 2001. In 2005 it was purchased by Nexus Loft Development Corporation. 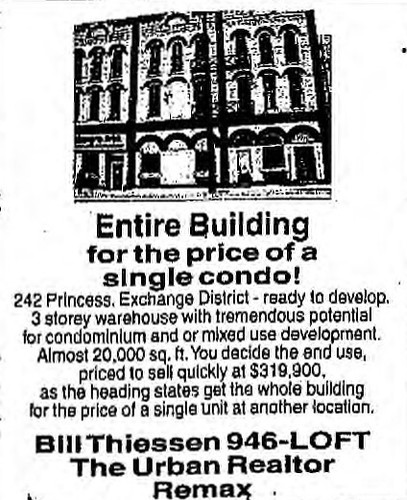 Nexus' plan was to renovate the building into condominium shells on the upper floors and retail on the main floor. That did not happen and the building was put up for sale in 2007. It is still owned by Nexus and still for sale as three separate buildings.

Back in 2012 I included it in my list of Winnipeg's most endangered heritage buildings and in recent weeks, things seem to be taking a turn for the worst. Open or missing windows in upper floors and a smashed window on the main floor can only mean additional damage to the building's interior over the fall and winter.

This is despite the fact that the City of Winnipeg Vacant Buildings By-law, introduced in 2010, was supposed to "target vacant buildings that are dilapidated, dangerous, improperly secured, subject to public complaints, and that have been vacant for extended periods of time." It gives the city the a last resort power to seize a building and either resell it to someone with a renovation plan, or to demolish it if it is deemed too much of a hazard.

In 2011 the owner was cited over a number of concerns about the building, including part of the facade near the front door "which appears that it could fall onto the sidewalk." The owner appealed and got an extension for the amount of time he had to comply. Presumably the work was completed.

This isn't just your run of the mill vacant building. In 2004, after a formal request from the owner, it was evaluated for its heritage and architectural merit and granted a Grade II status*:

The recent window issues have been a point of discussion on the Protect Winnipeg's Heritage Buildings from Demolition by Neglect Facebook Page as has contacting the city to finally get this building secured and properly maintained.

If you are interested in the condition, security and / or fate of the Bathgate Block building, send an email to 311@winnipeg.ca and it will be forwarded to the Director of Planning for follow up. For good measure you might also want to cc the following to let them know it is an issue important to you: MPagtakhan@winnipeg.ca, who is the area councillor; JGerbasi@winnipeg.ca, the chair of the city's Historic Buildings and Resource Committee; and info@heritagewinnipeg, Heritage Winnipeg, the city's heritage advocacy group.

* In 2014 the city changed the way these buildings are inventoried and is currently in the process of moving buildings from the old system to the new one. The Bathgate has not been transferred yet. 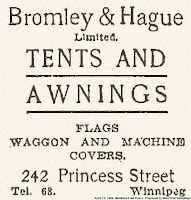 The building was built for William Bathgate and his business partner Robert Gerrie, who were also related through marriage. Robert Gerrie was my great great great grandfather, once called the father of the Winnipeg boom. He also built the Grand Union Hotel, The Princess Opera House, as well as the Palace Stables.