The Beginning and the End of Manitoba's Civic Holiday

Winnipeg's Civic Holiday, now called Terry Fox Day, is as old as the city itself. The first one was proclaimed by our first mayor, Francis Cornish, for Wednesday, September 16, 1874.

Cornish first floated the idea at the council meeting of July 27, 1874, suggesting that "some steps be taken to have a civic holiday shortly." He was familiar with such a holiday as it was already a custom in a number of southern Ontario cities, (Cornish was a former alderman and mayor of the city of London, Ontario.) Toronto is credited with having the first Civic Holiday in August 1869.

It took a few weeks to wind its way though the political process, but on September 11th the city clerk was instructed to draw up the official proclamation.

The reason for a "civic holiday" was to give citizens a day off during which they could take  time to enjoy and celebrate the achievements of their particular municipality.

It was different than most other holidays for a couple of reasons. Initially, it was granted in the middle of the week, presumably so that people would stay around town. It was also proclaimed by the mayor each year, so the exact date could vary widely from year to year as it was sometimes made to fit with other events or celebrations. (Winnipeggers also usually got a half day civic holiday for the start of the Winnipeg  Exhibition.)

Winnipeg's first Civic Holiday was a low key affair. Most businesses, offices and government services closed for the day. The Free Press, which did not publish, noted in an editorial the following day that “Winnipeg is not up to this sort of thing yet.” it reported that a number of construction sites were still active and that no big public events had been planned.

Rather than a lively celebration of the city, it said the downtown resembled a Sunday. (It also didn't help that a heavy rain storm began late in the afternoon, putting off any small-scale events that may have been planned.) 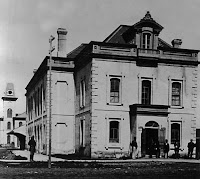 The following year, the Civic Holiday was proclaimed by mayor William Nassau Kennedy for Tuesday, August 18, 1875. This time, they were going to do it in style.

The city had started construction on its first city hall and public market building and chose the Civic Holiday as the day that to lay the cornerstone. The ceremony included speeches and a parades by various organizations. Over half of the city's population turned out to take part. (Read more about the day here.)

It was also reported that city parks were busy that day, the start of a long-time tradition of Civic Holiday picnics.Over time, large civic organizations such as athletic clubs, churches, ethnic organizations and unions organized these events, each attracting thousands of people to local green spaces.

Other Manitoba cities soon came on board. Brandon's first Civic Holiday appears to have happened on August 10, 1890, though mayor McDiarmid required a great deal of prompting from the city's business community and a large petition presented to city council before declaring it. That same year, Portage la Prairie also hosted their own holiday.

In the early 1900s the tradition of being held mid-week gave way to often being held on the first Monday in August, something that became a bylaw in 1938.

The change from a mid-week day off to a three day weekend also changed the intimate, local nature of the holiday. It meant that larger, more elaborate events could be held as there was an extra couple of days in which to set up and tear down. It also meant that people now had the time to leave the city that they were supposed to be celebrating. Railways and passenger ships offered special excursion fares to places like Portage, Selkirk and Grand Forks.

At some point, though I can not find when, the holiday was taken out of the hands of municipalities and became a province-wide affair.

For most, though, the civic holiday still represented a chance to enjoy activities in city parks. Large scale picnics and sports days were the norm until the 1950s.

In other jurisdictions, the name of the holiday was changed, usually to celebrate someone who had an influence on the city's founding. The city of Toronto, the founder of the holiday, changed the name from Civic Holiday to Simcoe Day in 1969, honouring John Graves Simcoe. In 1995 Ottawa renamed theirs Colonel By Day for John By. Hamilton has George Hamilton Day, (after the city founder, not the tanned American actor !)

In Alberta, the holiday is known as Heritage Day. That spawned the Edmonton Heritage Festival, now in its 40th year.

Manitoba, though, chose to go a different route and removed the connection between municipalities and the Civic Holiday. In 2015 they renamed it in honour of Winnipeg-born Terry Fox, encouraging people to use the day to raise funds for cancer research. 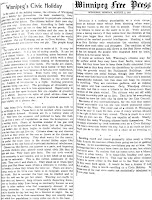 On August 2, 1937 the Winnipeg Free Press published a lengthy  editorial about the meaning of the Civic Holiday. It concluded with:


"Rambling round and round pleasantly idles away a Civic Holiday. It saves the cautious citizen from going too far or getting in too deep. In his meanderings, revelations pop out at him. He sees things that have always been there for him to see, but which he had never seen. He realizes that his home-town has a bloom he misses in other towns. It is home-like, healthy and open. It’s not a bad place to live in. This may be why other citizens who have to move either to the East or the West say they wish they were back again. It would be less a truism if not heard so often. This is worth recalling on a Civic Holiday."


Also see:
Instead of Terry Fox Day, why not celebrate hundreds of Manitobans?
Civic Holiday The Canadian Encyclopedia