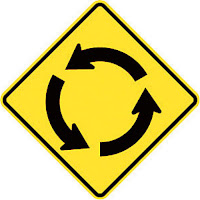 "Traffic circles" have gone and raised the ire of Winnipeggers again.

I've seen and used roundabouts in Europe, where they are an integral part of many traffic  systems and actually work. The reason they don't do so well here is that most drivers do not know how to use them properly and the city and province have not done much to help the situation. The result is that they remain foreign and confusing and people will actually take time to go protest when new ones are being built.

It's too bad because, according to the US Federal Highway Administration, a country where many cities have been converting intersections to roundabouts for decades, they are a much safer alternative to other types of intersections. Their data shows that:
So why are some up in arms in Winnipeg when the topic of roundabouts arise? 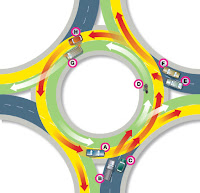 First off, Manitoba's Highway Traffic Act, and those of most other provinces, call them "roundabouts", so using the term "traffic circles" is a misnomer and people searching for the rules governing their use will never find them. Why the city has decided to use a different term that what they are officially called, which leads the media to do the same, is beyond me.

A huge part of what makes a roundabout work, and how cities around the world manage to make (gasp!) multi-lane roundabouts work, is that drivers must SIGNAL OUT of them. If not, some or all of the four approaching lanes of traffic must come to a stop when a car is inside the roundabout because you have no clue what it is going to do. It also makes it dangerous for cyclists sharing the roundabout if cars are going to suddenly pull out.

By not signaling out, a roundabout becomes nothing more than an an expensive, poncy looking, rolling 4-way stop. Why bother even changing it over, then?

Since this has been a bugbear of mine since roundabouts were introduced on Waterfront Drive, I always keep an eye out for who signals out and, more importantly, who does not. I have been in the circles with transit buses, police cars and fire engines, all official vehicles that should be obeying the rules of the road. I have NEVER seen one of them signal out. EVER.


I remember when Brandon introduced a couple of large roundabouts to its west end a decade or more ago. Manitoba Public Insurance (MPI), I believe it was, had a series of temporary signs the side of the road as you approached with handy tips: "Remember: yield to the car on the left"; "Remember: you must signal out". It was a simple way to get people used to the rules.

I don't blame city planners for adding roundabouts. On paper, and in most jurisdictions, they actually work to keep traffic flowing, (and who wants to stop at a red light or 4-way stop when there is no oncoming traffic?)  If crosswalk features are properly designed into them, assuming you live in a city where drivers actually stop at crosswalks, (which could a whole other blog post), they are safe and easy to use for pedestrians and cyclists as well.

So what can be done to get roundabouts back on track?
If you want to see a kick-ass version of what an online educational resource should look like, check out the Saskatchewan Driver's Handbook page on roundabouts and the roundabout section of the Washington State Department of Transportation's website.

A couple things:
I would reserve the term "traffic circle" to the traffic calming circles in River Heights, etc, which are not proper roundabouts. It is good to distinguish those.

From living in a neighborhood with a roundabout, I would dispute that "most drivers do not know how to use them properly". Most do*, but people THINK that most don't and oppose them on that basis.

*with the exception of the signalling issue that you mention. Most people do not signal out, but yet the roundabout on Lakewood still works. On smallish roundabouts it's difficult to signal sometimes as you may only in the circle for a couple seconds. I think the signalling is more critical on multi-lane roundabouts.