This is a "refresh" of a blog post I originally wrote at This Was Manitoba in 2008 after having been contacted by a member of Harvey's family seeking information. He was a missing piece of their family tree, having left for Canada at age 20 never to return home.

I was able to piece together some of his background and found that he was a "forgotten" Winnipeg solder. Here for such a short time before returning to Europe to die, his Winnipeg connection was not picked up by the papers.

I've lost touch with Harvey's family due to switching internet providers a few years back. If you are related or can add more information to any part of this write-up please let me know!


William Harvey was born February 17, 1881 to Robert and Frances "Fanny" Harvey of no. 4 Walton Street (at Urquhart Street) in Dundee, Scotland. He worked as a crane operator, or "craneman", in Dundee and served with the Gordon Highlanders for more than three years, seeing action in South Africa.

Soon after his return, he decided to seek out new adventures and immigrated to Canada in 1911, likely aboard the Allen Steamship Line's Sicilian which departed Glasgow in mid-April 1911. Harvey arrived at his destination of Montreal where the above portrait was taken and sent back home to his family.

Around that time, Winnipeg was in the midst of unprecedented growth, on its way to becoming what many believed would be "the Chicago of the North". Harvey, like many young immigrants at the time, found himself drawn west.

He immediately found work with the expanding Canadian Pacific Railway, first as a craneman, then a ‘turntableman’.

As a CPR crane operator there were a number of places that he could have worked. Perhaps at the cargo area behind the CPR station on Higgins Avenue or at the CPR's Weston Shops, which underwent an expansion in 1911. As a turntableman, he very likely worked in the service sheds or roundhouses at the CPR Weston Shops.

The Henderson Directory lists no address for Harvey for the couple of years he was in Winnipeg. This is odd as even if someone was living in a temporary situation, such as renting a bedroom or in a CPR bunkhouse, that would normally be indicated next to their name. For whatever reason, he appears not to have settled into a permanent home, apartment or rooming house. 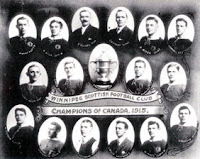 Hopefully during his time here he found a sense of belonging within the city's Scottish community.

The Winnipeg Robbie Burns Society, the oldest chapter outside of the UK, was created in 1907 by a number of Scottish workers in the very CPR shops where he likely worked. He certainly would have heard about the society, if he wasn’t an active participant.

There was also a very active sports scene that he would have enjoyed. For instance, in 1915 the Winnipeg Scottish Football Team won the city and provincial championships before taking the Connaught Cup as national champions. 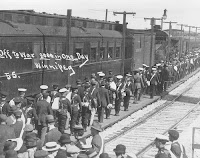 Given his military background, it isn't surprising that William soon signed up with the 79th Cameron Highlanders militia. On October 10, 1914 he enlisted with the 27th City of Winnipeg Battalion as a private.

William left Halifax for England on January 20th 1915 and on February 23rd 1915 was on to France. He was transferred in the field to 2nd Battalion Princess Patricia's Canadian light Infantry and rose in rank to Lance Corporal. Within weeks, 2PPCLI was involved in the Battle of Bellewaerde Ridge, Belgium. The regimental war diary describes the battle of May 4, 1915 this way:

“Heavy shelling continued through out the day. trenches in many places where blown in Nos 1and 2 coys (*companies) in the fire line trenches lost heavily. 26 men killed 96 men wounded two of which died two days later.”

William Harvey was one of the men killed that day. His circumstances of death record simply states "killed in action". 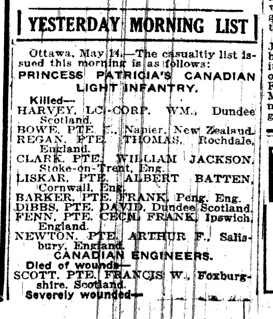 Back in Canada, his name was mentioned in the Winnipeg Tribune and Manitoba Free Press. They were just “wire service” notices of Commonwealth or Canadian soldiers killed. His name was not amongst the “local boys” section. With no other family in Canada and no permanent address, it appears that his his Winnipeg connection went unnoticed.

His death was also noted in the Peoples' Journal of Dundee, Scotland.

Harvey's body was never recovered. His name apprears on the Menin Gate Memorial in Ypres, Belgium. Inscribed in the monument are the names of the 55,000 soldiers killed in the area, 6,940 of them Canadian. This is an excerpt of the text over one of the gates:


“To the armies of the British Empire who stood here from 1914 to 1918 and to those of their dead who have no known grave. Here are recorded names of officers and men who fell in Ypres Salient but to whom the fortune of war denied the known and honoured burial given to their comrades in death.”


Each day at sunset the dead are remembered as traffic through the gateway is halted and two buglers sound the Last Post. The trumpets used were a gift by an officer of the Royal Canadian Artillery who fought there in 1915.

Harvey's name appears on the Soldiers' Relatives Memorial on the legislature grounds. The 1,600 names on it were compiled in the early 1920s.


Due to his brief time in Winnipeg and apparent transient situation, William Harvey was a man without a home town. An immigrant who came to make a new life, helped build the west, worked in the poor conditions offered by the railway repair shops and gave his life without an obituary or other recognition that he was a Winnipegger.

On the 93rd anniversary of his death I ran the above obituary in the Winnipeg Free Press and left flowers at the base of the CPR monument.