Behind The Photo: Masquers Club at Dominion Theatre (1935) 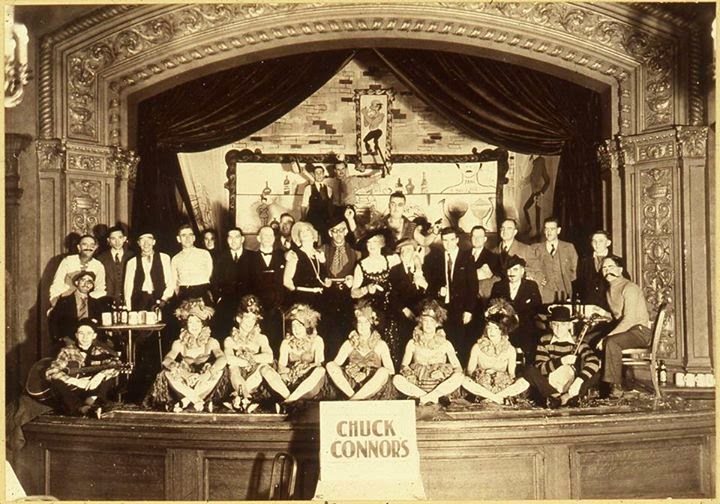 This photo, "The Masquers' Club of Winnipeg at Dominion Theatre, Winnipeg, MB", dated April 1935, is from the University of Winnipeg's Western Canada Pictorial Index, No. 08752, Miscellaneous Collection.

It was likely taken in early April, in conjunction with their 1934 - 35 year-end revue called Hits and Misses. Rehearsals began in mid-February and appeared on stage at the Dominion on the evenings of April 5, 6, 8 and 9, 1935. Directed by Moray Sinclair and Brenda Bennet, it consisted of two vaudeville-type numbers featuring a dance chorus of 30, then a one-act play, Anton Chechov's The Bear. The show was favourably reviewed by both newspapers, read the Tribune's here !

I could not figure out what "Chuck Connors" refers to. It does not appear in write-ups for their show or as the name of a prominent cast member. The only "Chuck Connors" circulating in the city at the time was in the 1933 film version of The Bowery, which was in its second run at neighbourhood cinemas. In it, Wallace Beery played the part of saloon owner Chuck Connors. Perhaps one of their vaudeville numbers spoofed the play or was set in Connors' saloon.

Here's more background on the venue and the company:

Circa 1925, Dominion on the left (source: winterbos)

The Dominion Theatre was located on Portage Avenue East, approximately where the Fairmont Hotel is now. Brothers George and Victor Kobold opened it in December 1904 as a vaudeville house. They were not part of a chain but did have an agreement with Orpheum circuit to show their performers when they came to town, which guaranted them a steady stream of decent acts. (The agreement ended in 1911 when the Orpheum Theatre opened but by then the Kobolds had already sold it off.)

The 1930s were a tough decade for live theatres. Their fortunes sagged through the 1920s as "talking pictures" became the preferred entertainment of the masses, then the Depression hit. The Playhouse, already cut adrift from the Pantages chain in 1923, became city property in 1935 in a tax sale. It was the same fate for the Walker the following year. The Dominion, though, seems to have slogged through under private ownership as a theatre for hire.


To survive, the theatre needed to be all things to all people. In the three months leading up to the WCPI photo being taken the Dominion was home to lectures by travelling professors, travelogue slide shows, a Mason's gathering, the River Heights School of Dancing recital, a few evenings of Canada-U.S. boxing matches and the Manitoba fencing championships.


The Masquers Club of Winnipeg was actually another name for the Eaton's Employees' Dramatic Club, started at the Winnipeg store in 1933.

Eaton's was big on providing and supporting "extra curricular" social and recreational activities for its employees. Head office liked the idea of a dramatic club, mainly for the fact that it attracted a larger participation among female employees than some of their other activities such as sporting events. the following year, the company rolled out the idea to its other stores.

Given the success of the Masquers Club of Winnipeg, which you will read about below, when the Toronto store employees were looking for a name for their dramatic club in 1934, they asked permission from the Winnipeg Masquers if they could use the same name, (source). They agreed, and the Masquers Club of Toronto was formed. Soon, there were Masquers Clubs at the Montreal, Hamilton and Calgary stores.

The Masquers Club of Winnipeg burst onto the Manitoba Senior Dramatic League scene in 1933. Their first feature play, The Man Born to be Hanged by British writer Richard Hughes, and directed by Winston McQuillin, was a huge success. It won top prize at local and regional drama festivals, which meant that in April 1933 they were off to Ottawa to compete against the country's best amateur dramatic companies. They won top prize: the Bessborough Cup.

Governor General Bessbourough and Countess Bessborough were to visit Winnipeg in the summer of 1933 and requested a command performance. The gala evening took place on August 2nd at the Winnipeg Auditorium. At the end of the performance the Bessboroughs formally presented the cup to the Masquers. 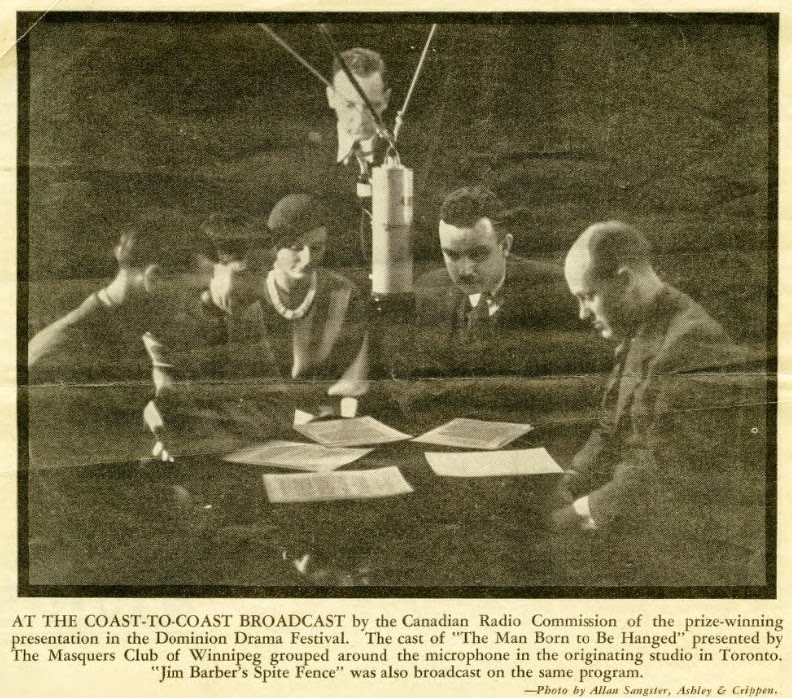 Source: U of M Archives and Special Collections

The win also earned the cast, (Ernest Nichol, Moray Sinclair, Mary Munro, R. Robertson and Eric Wiseman), a national audience. They were soon back in Ottawa to record the drama for the Canadian Radio Commission, forerunner to the CBC. The show was broadcast across the country on May 5, 1933.

The Masquers Club Of Winnipeg's 1934 - 35 theatre season also ended with a regional victory for Anton Chekhov's The Bear. Again, they went to the national finals but this time placed second. Actor Moray Sinclair, however, was singled out for the best acting performance of the festival.

Later that year, Allan Wade, a veteran London stage actor and playwright who was often invited to be a judge at regional and national dramatic festivals, praised Sinclair when he was in Winnipeg and said that he should go professional. He did go on to be a noted local director. The Royal Manitoba Theatre centre has a scholarship con-named in his honour.

The Masquers continued its local success but does not appear to have made it back to the national festival after 1935.

It appears that the club did not enter the Drama League for the 1941-42 theatre season. they did some entertain the troops shows as part of Eaton's war efforts. After that, they disappeared.

In larger markets, like Montreal and Toronto, the Masquers continued on for a time. The Toronto group did quite a bit of touring during the war, including to England. 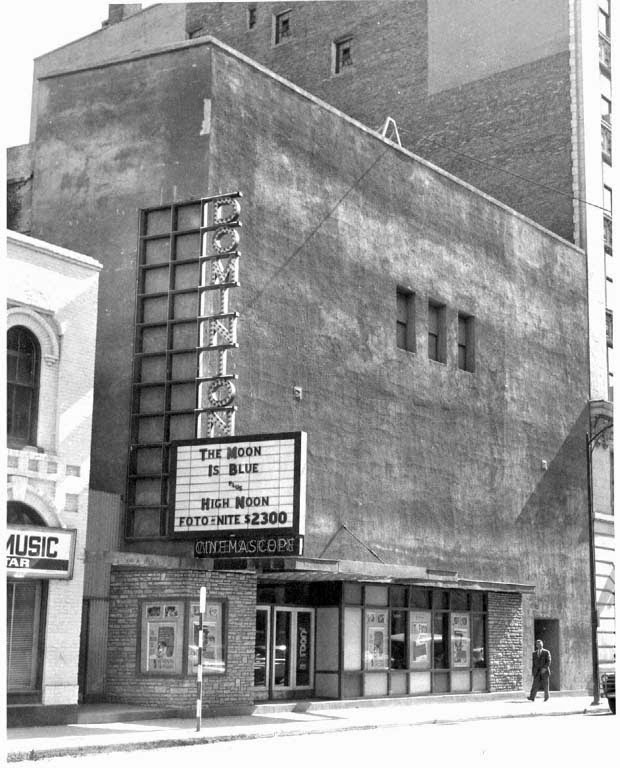 The Dominion Theatre, which had a terrible exterior renovation done to it some time in the 1950s, lived on.

In 1957 it became home to an upstart regional theatre company run by John Hirsch called Theatre 77, so named because the Dominion was 77 steps from Portage and Main. The following year, 77 merged with Tom Hendry's Winnipeg Little Theatre to create the Manitoba Theatre Centre.

The Dominion was MTC's home for a decade, until its demolition in late 1968 to make way for the Richardson Building project, which included Lombard Place and Winnipeg Inn, (now the Fairmont Hotel). 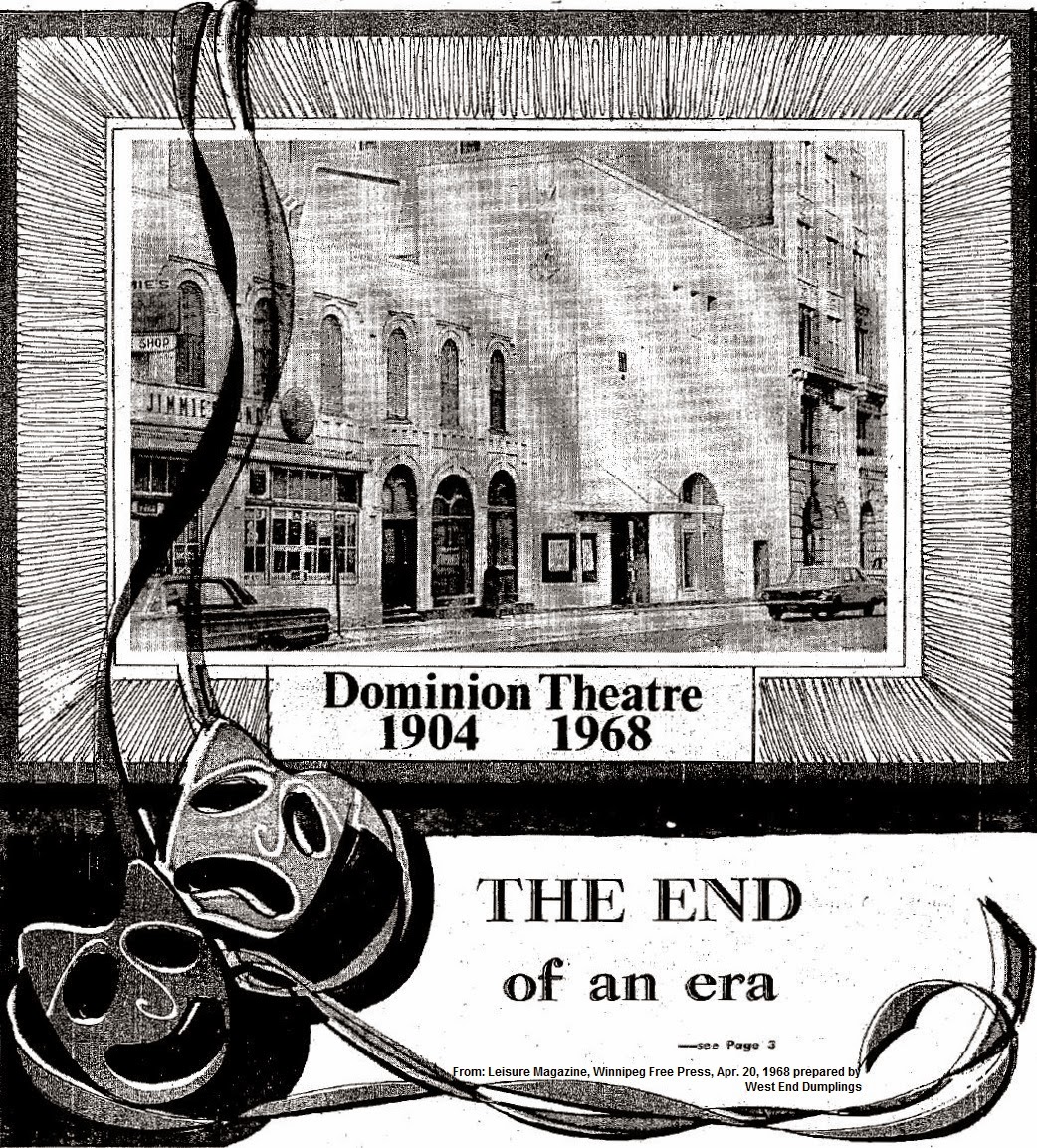 The final performance at the Dominion was MTC's A Delicate Balance on April 20, 1968. After the show, a "final curtain party" was held. Anyone who had worked at the theatre, on stage or behind the scenes, during its 64 year run were invited to attend. The following morning MTC and its alumni held a farewell breakfast on the stage.

Construction on its new home, which was to be completed by the 1968-69 season, had not even started yet, so MTC moved to the Centennial Concert Hall. Their theatre finally opened on September 30, 1970 with a welcome breakfast on the stage for MTC and its alumni.

eToro is the #1 forex trading platform for rookie and professional traders.