Sidney Edwards was born in Bournemouth, Hampshire, England and came to Winnipeg around 1910 as a young adult with his parents, James and Mary Edwards, and at least one sibling, brother Harry. The family settled on Arlington Street.

Soon after, Sidney soon moved out on his own, initially renting a room on Alexander Avenue and by 1914 renting a home at 872 Burnell Street with an A. Fritz. He worked for Eaton's as a painter in their contract services division which did painting and decorating of  homes and commercial buildings. He was better known around town, though, as a soccer player for United Weston of the Winnipeg and District Football League.

In October 1914 he enlisted with the 27th Battalion in October 1914, listing three years of previous military experience, with the King's Regiment (Liverpool) before coming to Canada. Oddly, he chose to sign up under a pseudonym, Sydney Fritz, which was the last name of the person he lived with on Burnell Street. This change in name is noted on his grave registration, (more about that later.)

Though his Circumstances of Death Certificate simply reads "died of wounds at No. 17 Casualty Clearing Station", the April 6, 1916 entry in the war diary of the 27th Battalion describes the actions of a fellow soldier who received a distinguished conduct medal for trying to save Fritz:


"On April 6th 1916 at St Eloi, Sgt Haines, although wounded in side by shrapnel and badly shaken went to the assistance of 71690 Sgt D. Fritz* (27th Bn. Bombers) who was severely wounded and lying 200 yds in front of our trench. Sgt Haines went out under heavy shell fire in daylight and carried Sgt, Fritz under shelter and saw that his wounds were dressed and that he was properly attended to."
(Source: Brett Payne, CEF Study Group)

* It is noted later by a researcher that D. Fritz is actually Sidney Fritz. 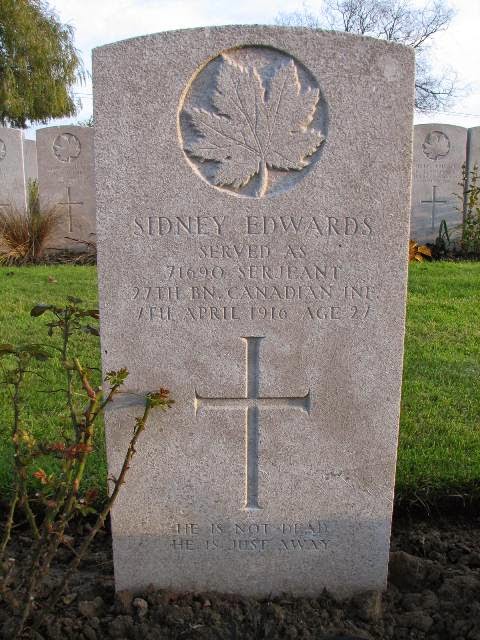 
Fritz died the following day, age 27, and is buried as Sidney Edwards in Lijssenthoek Military Cemetery, Belgium. Both newspapers noted that he was Mentioned in Dispatches and awarded the Military Medal just days before his death, though his Virtual War Memorial does not note this and I cannot find mention of it anywhere else on the internet.

As for Sydney's pseudonym, it was an odd choice given that Fritz is short for the German name Friedrich or Frederick, and was a nickname widely used by Allied forces to refer to German soldiers. This was not a wartime thing for Sydney as he is Fritz in sports stories and the Henderson Directory for a couple of years before enlisting as Sidney Fritz. On his attestation papers he lists Mary Fritz of 872 Arlington as his next of kin and that he was not married.