I saw this 1909 Christmas advertisement in the Winnipeg Tribune and wanted to find out more about the man behind the jaunty fur hats ! Henry B. Orkin was his name and at one time he was the fur hat king of Winnipeg.

Henry Orkin opened Orkin’s Millinery on September 1, 1908 at 259 Portage Avenue at Garry, the corner where the Paris Building now stands. Most of the hats he sold were his own designs, one ad boasting that he had 500 one of a kind creations in stock. In 1913 the name of the store changed to H. B. Orkin’s, or just Orkin’s, to reflect the expansion of his line into fur coats, dresses and suits for women.

Buoyed by his success and Winnipeg's red hot economy from 1909-1912, Orkin decided, like many other businessmen of the day, to try his hand at property development. He was a tenant on the corner and had taken out a 50 year lease with an option to purchase the property. He even had a four storey building to go there.

Orkin was caught out when the heady days of the early 1910s turned sour. In 1913 Winnipeg faced a recession that caused land prices to plummet. The start of World War I made things worse and dealt a heavy blow to those dealing in luxury goods. A nearby casualty of this was the luxurious Olympia, now Marlborough, Hotel which went bankrupt after the start of the war.

In 1914 and early 1915 Orkin struggled to keep up with his obligations to the store and the development deal. He surrendered his option on the property to the eventual developer of the Paris Building and suddenly closed the shop with creditors chasing him.  When the creditors entered the store, there were a number of items missing, including the financial books. Also, a number of high-end fur coats and hundreds of muskrat skins, for which the wholesaler in Montreal had yet to be paid for.

They followed the trail and discovered that many of the coats were being sold at furriers around the city. One testified that Orkin had been selling them off for cash after the store closed.Others were found at a temporary shop that he set up on Albert Street. 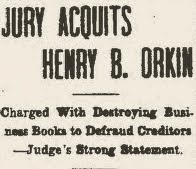 Broke, Orkin retreated to his Dugald, Manitoba home, which was in his wife Olga's name. In March 1916 police showed up at his door, charging him with numerous accounts of attempted fraud against his investors.  Though he was granted bail, he could not afford it.

The cases, two separate ones, went to court that summer and in June and July 1916 he was found not guilty on all charges. It's hard to explain why. Just as today, media make more of an issue over someone being arrested and charged, but their acquittal only gets a brief mention. 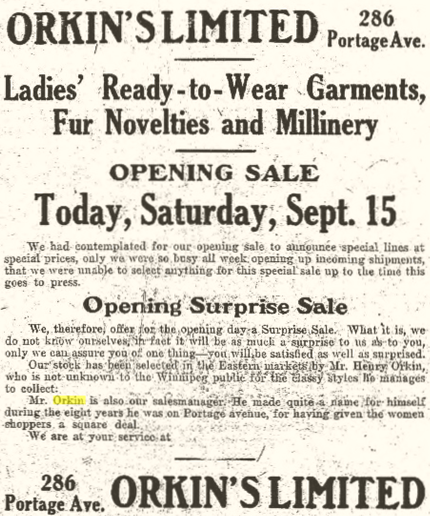 Orkin did try to make a comeback. In September 1917 he opened Orkin's Limited, a store selling ladies clothing and accessories. It was short lived. He went bankrupt and the contents were sold off in May 1918.

Orkin's personal life is a bit of a mystery. Though his 1915 ads states "since 1904", I can find no listing for an Orkin going back that early in the Winnipeg Henderson Directories. His personal life did not make the newspapers until his arrest, and even then, little was mentioned outside of his business dealings.

In the 1916 prairie census there was a Henry B. and Olga Orkin, with two sons and a 3 year-old daughter Beatrice Fairy in the R.M. of Springfield, where Dugald is located. Henry and Olga were Russian Jews who had their three children in Winnipeg starting in 1909.

Using that information, I came across Notes from a Wayfarer - Nathan Keyfitz's Memoir. He met Beatrice in Ottawa in1936 and would marry her in 1939. He recounts that Henry and Olga owned a small Ottawa bakery called "Orks"on Bank Street. You can read about them and the bakery here.

After doing some research online, I got my first e-cig kit from VaporFi.