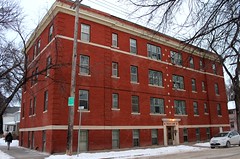 Evelyn Court is a three storey walk-up apartment block at 951 Westminster Avenue at Aubrey Street. Constructed in 1914, the first "for rent" ads appeared that November in the Winnipeg Free Press.

On Saturday, December 18, 1948, ten year-old Douglass Hanson was staying over with his aunt, home economics teacher Miss Vera Douglass, in suite 16. Douglass was a Winnipeg Tribune carrier and grade six student at Greenway School who normally lived at 654 Sherburn Street.

Douglass was prowling the building’s hallways around 10:30 p.m. when he smelled, then saw, smoke coming from under the door of a neighbouring suite. He ran back to inform his aunt and together they knocked on all 17 suites to make sure that everyone got out safely. It was a good thing they did, as minutes later the building's roof was ablaze.

By early next morning, the fire had destroyed the roof and upper floor suites of the block, while smoke and water caused extensive damage throughout the rest of the building. The damage estimate was $75,000.

According to E. Houston, assistant fire marshal, the cause of the blaze was the hot ventilation pipe that ran from the main chimney to the roof of the building. The brickwork around the recently installed pipe meant to shield the roof's wood deck from the hot steel had crumbled due to a poor mortar mixture. It was just a matter of time before the material ignited.

As it was the week before Christmas, tenants were allowed back in a couple of days later to retrieve whatever valuables they could. When they arrived, though, they were in for a second shock. Looters had picked through their suites, stealing items such as jewellery and silverware. One complained that thieves even bored a hole through the top of a bureau to get into a locked drawer.

One of those especially affected was Jack Boyd who lived at Evelyn Court with his wife and child. Boyd was blind and worked at the CNIB. In the scramble to get out of the building, he left behind his 21 jewel Braille watch, which was subsequently pilfered. The day after reports of the theft appeared in the newspapers, he found the watch in an envelope stuffed in the mailbox of the home where his family was staying.

It was a disturbing déjà vu for another tenant. Mr.  R. G. Miles’ suite was on the destroyed top floor. He had recently moved to Evelyn Court after he was dislocated from the Rosemount Apartments on River Avenue when it suffered a fire. He told the Tribune that for his next home “I am going to build a concrete dugout, cook by steam and live under a shower.” 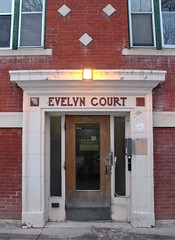 Nathan Popeski, a prominent local contractor, was the owner of the building. He said that he would waste no time getting the site cleaned up and the rebuilding process started.

It's unclear when the building reopened. There were no "for rent" ads in either the Free Press or Tribune in 1949.The next mention of the block comes in a March 1951 interview with an existing tenant on a story unrelated to the fire.

Whatever happened to Vera and Douglass who undoubtedly saved lives that night ?

Vera continued as a home economics teacher at Daniel McIntyre, Issac Brock and Hugh John McDonald schools until her retirement in 1962. She died at Misericordia Hospital in 1974.

Douglass Arthur Hanson likely attended the U of W Collegiate, graduating in 1959, then went on to study accounting. While articling at Price Waterhouse, he married Nadine Elise Yaremko in Winnipeg on September 8, 1962 and the couple moved to an apartment on Mayfair Avenue. In 1964 Douglass received his certification and an award for being an outstanding student by the Chartered Accountants Students' Society of Manitoba.

After that point he disappears from newspaper mention, presumably moving on to another city. He is mentioned in Vera's 1974 obituary as surviving her.

While researching this blog post, I found that Douglass and Vera were not the only heroes of Evelyn Court.

Neil and Ella Hepburn and their three small children arrived from Montreal in 1931 and took up residence in suite 2. Neil was a long time employee, a plater and colourer, at Winnipeg Brass and Fixtures at 600 Clifton Street at Portage.

Their son Charles served in World War II with the Princess Louise Dragoon Guards. One day in July 1942 he was walking along the Thames near Staines, Middlesex and came across a teenaged boy whose canoe had just capsized. Charles threw off his coat and shoes and swam 30 meters in a strong current to rescue him. It turned out that the boy could not swim and would surely have died. The Royal Humane Society presented him with a life saving certificate for his actions.

Mr and Mrs. Hepburn lost everything in the fire. After living for a year on Sherbrook Street, they returned to live at Evelyn Court for a few years until Neil retired.

Interesting article, and a trip down memory lane as I lived in suite 16 back in the late 80s.

Just thought you'd like to know the 'wife and child' of Jack Boyd are still alive and living in Winnipeg. My mother Pat lived in the west end up until 3 months ago when at 97 she moved into assisted living in the south of Winnipeg. She and my father were 'originals' at McClure Place on Greenwood Place; my Dad died in 1991, my mother lived at McClure for 33 years. I still have my Dad's brail pocket watch; your story about it is true and part of our family lore.

Hey Chris! Just to add a further connection for you, Marilyn Boyd is my Mom, Jack Boyd was my Grandpa and Pat Boyd is my Grandma. The story of the fire at Evelyn Court is one my Grandma still retells frequently. Thanks for the great piece!

That is great to hear ! I love getting modern day updates to these old stories. If one, or both, of you email me your email address I can send you the full article about Boyd. I think both the Trib and Free Press did a story about the theft. I'm at cassidy - at - mts.net

Was this the Jack Boyd that perhaps played soccer in Prince Albert / hockey in Winnipeg in the 1930s? If by chance yes, can you connect at rscott - at - canadasoccer.com. Thank you.