Richard Siberry was born in Knockcroghery, Roscommon, Ireland in 1894 and came to Canada when he was around 20 years old. He first appears in the 1914 Henderson Directory residing at 615 Notre Dame Avenue and working as a clerk at Eaton's. The following year he moved to a house at 533 Toronto Street with a group of about five other young men, two of them were also Eaton's clerks.

In March 1914 Siberry joined the Queens Own Cameron Highlanders militia. When war was declared he accompanied them to Valcartier, Quebec where they joined three other regiments to become the 16th Battalion (Canadian Scottish). They were part of the first wave of Canadians to leave for Europe starting on September 30th, 1914. (Siberry was aboard the S. S. Andaina which sailed on October 3, 2014.)

One account notes that he was promoted to Lance Corporal in December 1914 and his entry in the Book of Remembrance reflects this. Other records indicate that he was still a Private at the time of his death.

For friends here in Winnipeg and family back in Ireland, the last weeks of Siberry's life were agonizing to follow. He appeared frequently in the war office's daily "casualty list" in June and July 1915. It prompted the Winnipeg Tribune to note:


“No Winnipegger has figured more prominently in the casualty lists than private Richard Siberry…. Time and again, more than a dozen times in fact, he has been reported as missing, wounded, prisoner of war, killed in action, then dead of wounds.”


Through all of his appearances on the official list, Siberry had already been dead for weeks. He received a gunshot wound to the leg on May 5, 1915 and was taken prisoner. He died the following day and was buried by the Germans. His final resting place is Larch Wood (Railway Cutting) Cemetery in Belgium. 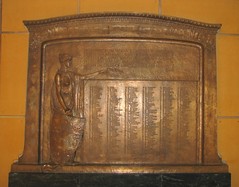 Siberry was one of 3,327 Eaton's employees that enlisted for military service, (1,101 from the Winnipeg store.) Of these, 238 were killed in action or died of wounds, 470 were wounded, and 41 were taken prisoners of war. He is commemorated on the Eaton's Roll of Honour tablets in Toronto and Winnipeg, the Soldiers' Relatives Memorial in Winnipeg and the Scottish National War Memorial.

If you are interested in a bit more information pertaining to Siberry, the Archives of Ontario have a collection of Eaton's employee portraits taken at their time of enlistment. One entry is for J. R. Siberry and looks similar to the man in your post. The link to the site and database is here: http://www.archives.gov.on.ca/en/explore/online/soldiers/index_soldiers_names_s_u.aspx#S-U

You just need to enter the code under Siberry's name in the search engine, (I0073276) and you will see if it is the same man.