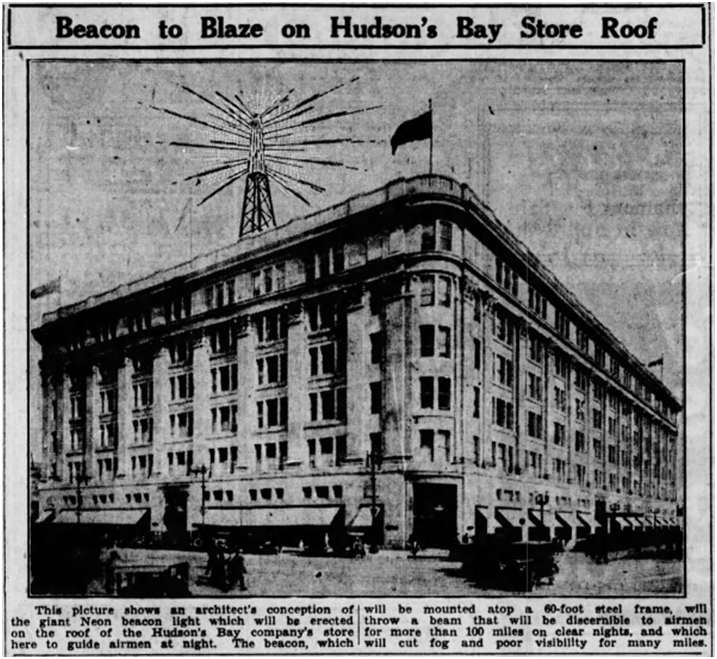 There seems to be no end of interesting historical tidbits about the Bay Downtown. I recently stumbled across something called the "Great Beacon", the strongest light in the British Empire, which shone from atop the store in the early 1930s. It was equal parts advertizing gimmick and practical safety device. 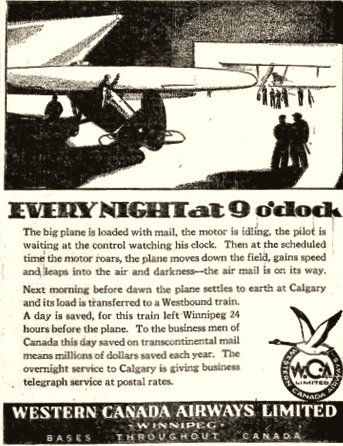 The first airmail flights to and from Western Canada were set to take place at Stevenson Field on March 8, 1930. It was a big deal for not only the budding airline industry, but the the city of Winnipeg, which would be a hub for western mail going east and to points international, and for anyone who mailed letters or packages to or from the west.

The British Government, readying itself in 1929 for its first regularly scheduled commercial flights to and from Europe, experimented with giant beacons or "aerial lighthouses" near the coast that would point pilots in the direction of the nearest airport, especially useful in case of fog. The trials were a success and the largest permanent installation was established at Croydon, London in November 1929, throwing off more than  one-million candle-watts of light.

Crossing the sparsely populated Canadian prairie at night would be similar to crossing the ocean. Dark and featureless and at times foggy or snowy. It appears that the Hudson's Bay Company took the initiative to create a similar beacon atop their Portage Avenue store in Winnipeg in time for the first airmail flight.

They approached C. Gibson Ford, manager of the Western Division of French multinational Claude Neon Lightning Ltd. “Though perseverance and efficient work due primarily to civic pride...” he assembled the necessary components to create the beacon.

The light fixture and six 11,500-volt transformers were built by Canadian General Electric. Claude Neon supplied the spotlight bulb and 24 neon bulbs, each 32 mm in diameter, which formed a hexagon shape around the central spire. The 60-foot steel spire required to hold it all was designed by  Carter, Halls and Aldinger, engineers and built by Manitoba Bridge and Iron Works Ltd.

Because the beacon wasn't actually at the airport, which itself was outfitted with a new but smaller beacon for the occasion, the Bay's beacon included a powerful spotlight that shone in the direction of Stevenson Field for pilots to follow.

When it was lit, the beacon created 2,000,000 candle-watts of light that could be seen for 100 miles on a clear day. It was 20 per cent stronger than Croydon's light, making it the brightest light in the British Empire.

With the beacon in place, it was now a matter of planning the weekend-long celebration to go with it.

The postmaster general had planned an inaugural ceremony of his own, but was persuaded to collapse his in with the Bay's. On Saturday, March 1st, Leigh Britnell, a pilot and operations manager of Western Canadian Airways, dropped circulars from his plane over the city, each containing a lottery number. These could be brought to the store on the Tuesday following the lighting to be eligible for prizes. Most had an aviation theme, such as goggles, helmets and scarves.

Also on Saturday, the store drew back the curtains on its store windows to show displays documenting the history of transportation in Manitoba, from the Red River cart to the modern airplane.

On Monday, the night of the lighting, there was a VIP dinner held at the Bay which was also broadcast live on CKY radio, (at the time owned by MTS.) There were speeches by aviation pioneer James Richardson, C. Gibson Ford of Claude Neon, and W. Martin, head of the young men’s section of the Board of Trade. Postmaster Veniet made the formal announcement that inaugurated the service.

The HBC relished the attention. They positioned themselves as a company not just of the past but of the future by supporting the airline industry. Later that year they erected similar beacons on their Calgary and Vancouver stores. Annual "Beacon Day" sales were held to remind people of the structure.

What of the Bay's chief rival, the Timothy Eaton Company ? They, too, did their part for airline navigation.

In September 1930 they allowed a concrete arrow to be installed on the roof of their store. Little fuss was made, I could find only one small article about its installation with no mention if this was a store initiative or that of an aviation group or authority. (The concrete arrow as a wayfinding device seems to be more of an American thing than a Canadian one.)

What is believed to have been the strongest beacon in the world was installed atop the Palmolive Building in Chicago in August 1930, said to have been 2,000,000,000 candle-watts in strength. It is still there to this day. Recent attempts to relight it as a landmark have failed. 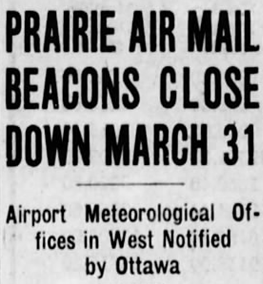 What became of the Bay's beacon ? For all of the fuss and expense, it was only in operation, nighttime only,  until the end of March 1932. Airmail service was cut as a Depression-era cost-saving measure and the need for the lights eliminated.

I could find no mention in subsequent years of the beacon ever being used again, or when it was dismantled.

This article from a 1939 edition of Popular Aviation talks about early Western Canadian airmail service, including the beacons. Also see this story from the Winnipeg Real Estate News.