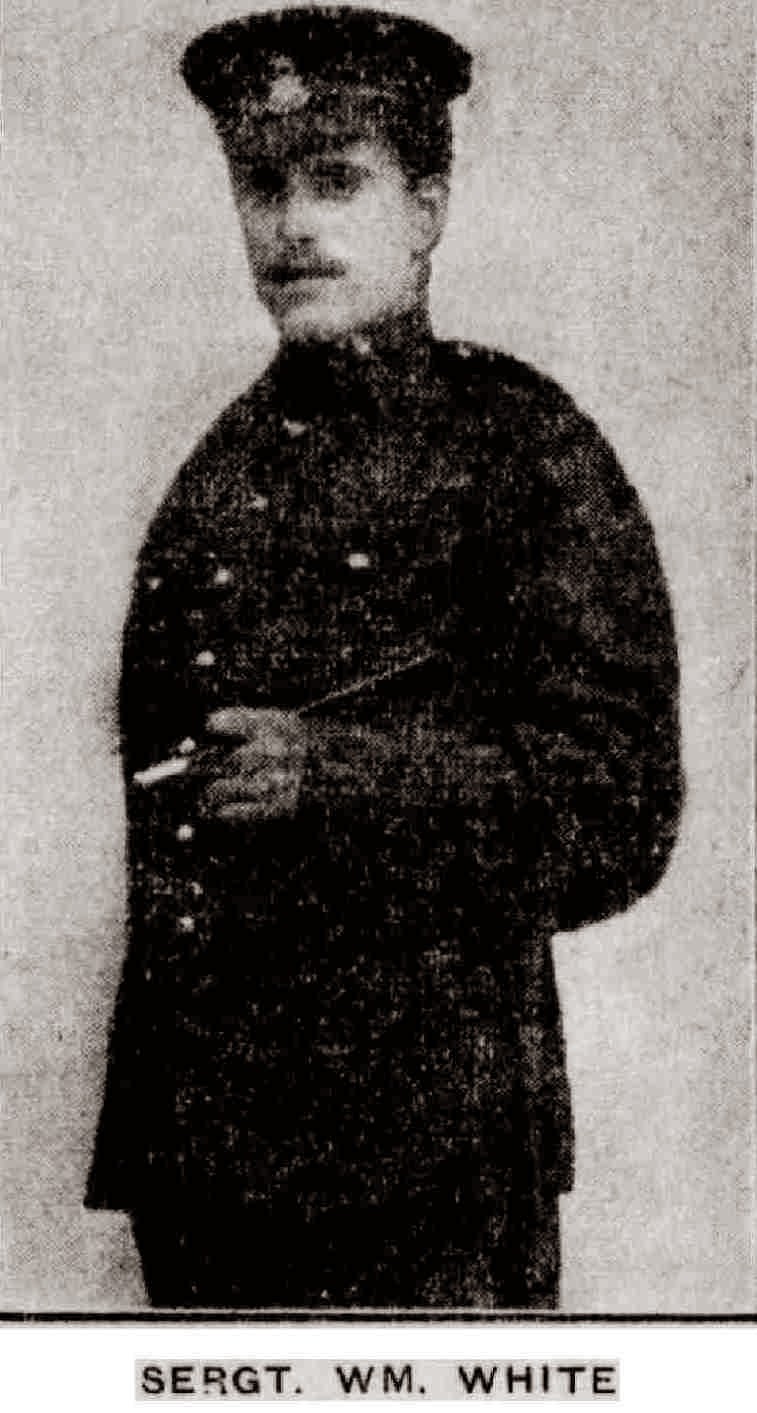 William, a carpenter, and his brother, A. E. White, a  builder and contractor, came from England in 1910 and lived together at 1040 Tenth Street.

Soon after arriving, William joined the 99th Manitoba Rangers, eventually becoming a corporal. On September 22, 1914 he signed up with the Canadian Infantry (Manitoba Regiment) 8th Battalion and was deployed overseas. There, he rose to the rank of sergeant.

White may have married after he enlisted as his attestation papers note that he is single with next-of-kin his mother in England. The 8th Infantry Battalion Nominal Roll of 1915 and his Virtual War Memorial entry, however, show him as married to  Emma Grace White of East Ham, London. 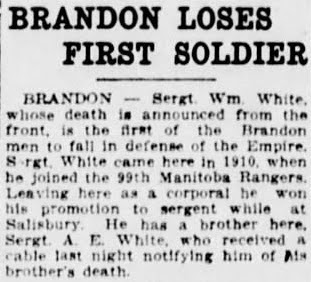 On the evening of March 28, 1915, A. E. received a telegram informing him that William had been killed on March 14. Details such as where and how it occurred were not included and none of the subsequent news coverage in the Brandon Sun or Winnipeg newspapers provided any more details.

At the time of William's death, A. E. was still living in Brandon and married with a two-year-old son. He also held the rank of sergeant, but it is unclear who with, though most likely he was in the a militia.

His brother's death prompted A. E. to join the regular forces the following month. As reported in the Brandon Sun on April 29th, “Sergent White stated that it was his chief wish that he might take the place of his lost brother’s place in the firing line and to this end he was leaving tomorrow for the old country.”


Where A. E. ended up is a bit of a mystery. Dozens of men with variations of the name "A. E. White" served in the military from Canada alone and hundreds more from England, if that is where he ended up signing on. This makes searching records for him very difficult.

It may be that he stayed near Brandon. The Brandon Sun ran a photograph in their August 30, 1916 edition showing the No. 10 Canadian Army Veterinary Corps, (which was a militia unit based in Winnipeg), at Camp Hughes. In the front row is a "Sergt. A. E. White".

Newspaper searches show no additional mentions of A. E. White in Brandon or Winnipeg, which likely means that he survived the war. In the G. F. Barker book, Brandon: A City, he notes that an "A. E. White" received a King George Jubilee medal in 1935 for his work with the Legion.

This soldier's history has been pieced together using a number of sources. If you have additional information or would like to point out a factual error, please do so in the comments below or by email at cassidy-at-mts.net.