The nondescript building at 810 Notre Dame Avenue at Beverley Street, now home to Rebel Waltz Tattoo, was once a Bank of Montreal that was the scene of one of the largest and boldest holdups in the city's history. 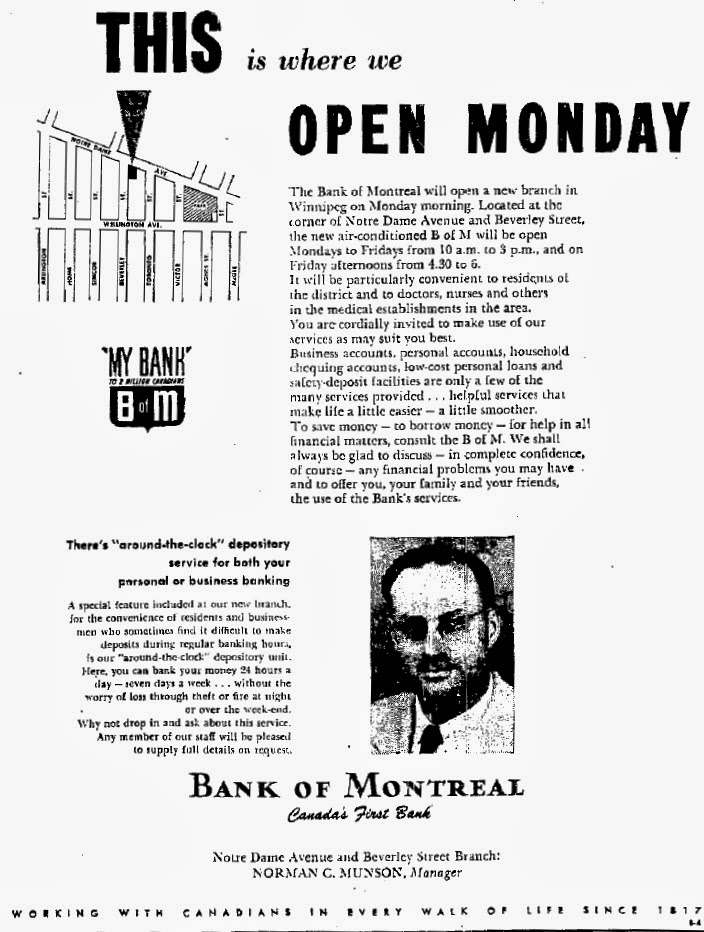 Home to a Safeway store from 1933 to 1959, the following year the Bank of Montreal purchased the land and began construction on a new branch, its 23rd in the Greater Winnipeg area. What was of particular interest to the company was its proximity to the large number of employees working at the collection of medical facilities across the street that we know call the Health Sciences Centre.

The branch opened on June 19, 1961. It featured air conditioning and a night deposit slot to allow for "24 hour banking". The first manager was Norman C. Munson who had been manager of the Carberry, Manitoba branch for a couple of years and prior to that worked at branches in Saskatchewan.

It wasn't a typical holdup. Bandits broke into the bank the night before and stayed in the basement overnight. They waited until nearly a half hour after the bank had opened before appearing in the upstairs doorway. Dressend in green work overalls and train engineer caps, their faces were concealed with stocking masks. One was armed with a  sawed-off shotgun, the other a pistol.

They demanded the money from each wicket then led manager Munsen to the vault at gunpoint. He opened it and the men loaded up the stash on-hand for the General Hospital's payday the following day into a suitcase. Munsen and his three staff, two men and one woman, were then led into the vault. The bandits tried to shut them in but could not close the door properly. Seconds after they left, at 9:34 a.m., Munsen tripped an alarm. 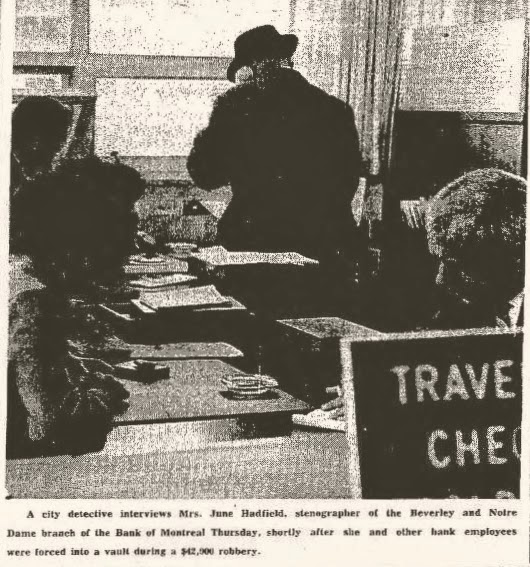 At first, police had few leads. The bank staff couldn't see the faces of the men or the type of car that they were driving.

Reports soon came in of a car speeding through the West End from the direction of the bank. It was a blue and white 1956 Meteor that had been reported stolen from St. Boniface the night before. That car was soon found abandoned at Sargent Avenue, (what the thieves didn't know is that the car was being repaired and its radiator was sitting in the trunk !) Reports soon came in of another car, this one a green 1950s Pontiac, speeding and driving recklessly. Police went on the assumption that this was the car they were looking for. 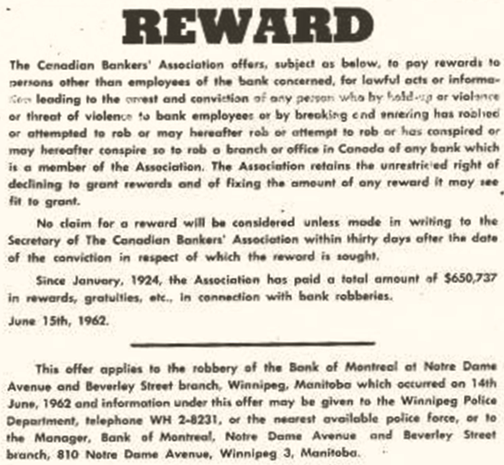 
Despite the manhunt and a blockade at the city limits, the men slipped through. The Canadian Bankers Association tried to ensure that leads kept coming by offering a reward, standard practice in those days.

The following day a farmer near Anola, Manitoba noticed two men walking down a lonely rural road with a large black suitcase. RCMP investigated and found that green Pontiac off the side of the road. It has been trashed. Winnipeg police and RCMP converged on the site with tracker dogs. In the bush nearby they found a pile of used toiletries and abandoned clothes but no bandits.

Police assumed that the men were headed east and notified RCMP and OPP along the way. 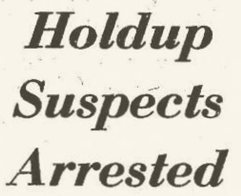 
The crewmen of an east-bound CPR train radioed their dispatch that there were two men aboard their train that seemed suspicious. OPP boarded when it pulled into Fort William (Thunder Bay) the next day and arrested the pair on suspicion of robbery but found no money.

Police retraced their steps to Kenora, Ontario, where the men got on the train. They found that the pair spent the night in a hotel and went on a shopping spree for new clothes, one bought a teddy bear for his child. After dinner they went to the CP station to purchase train tickets and each shipped a parcel to different Montreal addresses.

The CPR traced the packages and found that they had already reached Sudbury. Police there intercepted them and found that they contained the missing money, minus about $500 spent in Kenora. Once the money was recovered, the thieves were done for. Real Pierre Ouimet, 24, and Jean Forest, 26, both from Montreal, confessed to the crime.

It turns out that Ouimet arrived in Winnipeg first and had been watching the bank for about a month to find when the hospital's payroll arrived. He also purchased the green Pontiac.

The night before the robbery they stole the Meteor in St. Boniface and parked the Pontiac on near Sargent and Beverley. They broke into the bank's basement and lay in wait for it to open the next day. After the crime, they drove the Meteor to the stashed Pontiac but had to abandon it near Anola when the engine seized. From there, they hitched a ride in a truck to Kenora where they divvied up the money and sent it to relatives in Montreal.

The two men were sentenced to ten years each in Stoney Mountain for the robbery plus two years for the car theft. The long prison sentences imposed by the judge were meant to discourage other outsiders from coming to town and pulling jobs here. 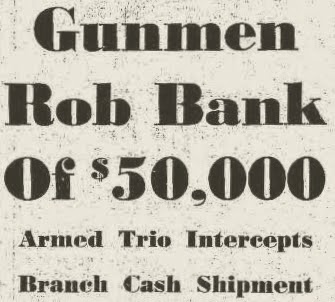 This wasn’t the only big holdup at this branch.

In December 1967 three armed men held it up just as staff were loading $50,000 into a car for transportation to a mini-branch located inside the Health Sciences Centre. The staff of five were forced to crouch down on the boulevard at gunpoint as the trio finished loading the loot and stole the car. The vehicle, along with empty cash boxes, were recovered a few days later but a newspaper search in the year that followed turns up no stories of any arrests.