Behind the Photo: Called Bandit's Bluff on Ellice Avenue (1939) 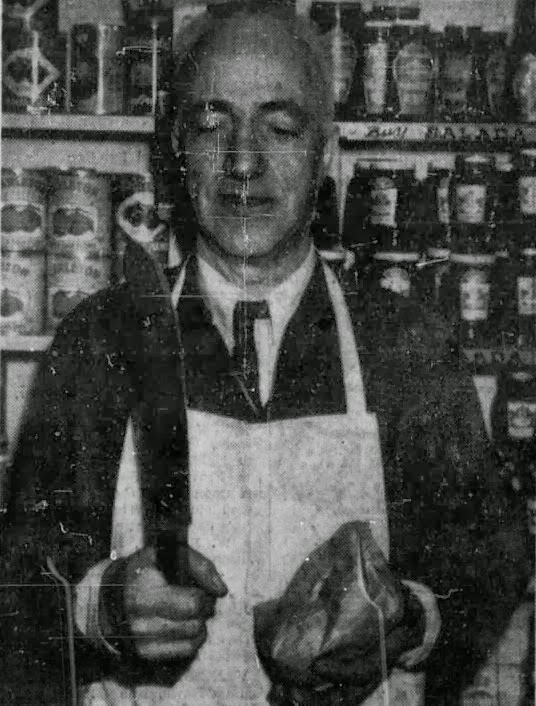 This photograph of Harry Spottiswood appeared in the February 14, 1939 edition of the Winnipeg Tribune with the caption "Called Bandit's Bluff". He is holding up the carving knife that he used to ward off an armed robber at his grocery store at 501 Ellice Avenue at Spence Street.

Since 1950 the convenience store at Ellice Avenue and Spence Street has been called Y-Not Foods but in the 1930s it was known simply as Ellice Grocery. From 1934 to about 1947 it was run by Harry and Phoebe Spottiswood who also lived in the suite at the back of the store. There, they raised their daughters Margaret and Evelyn. (There were three other suites upstairs that were rented out to tenants.)

At 10:30 p.m. on Monday, February 13, 1939 a man entered the store and asked for a nickel worth of apples. When Harry opened the till to make change for a quarter, the man pulled a gun and asked for all of the money. Before he could come closer Harry pulled out a carving knife and, according to one newspaper report, told the robber to "come and take it, then".

Instead of challenging Harry, the robber fled the store but not before turning and firing a shot towards him. The round turned out to be a blank and nobody was injured. (Harry came out five cents ahead on the deal as the man left his apples behind !)

February 1939 was a particularly violent one in Winnipeg and its surrounding municipalities. In the forty-eight hour period between the night of February 11th and Harry's incident, there were seven armed robberies in Winnipeg and St. Boniface. Over the next couple of weeks there were other clusters of armed robberies, armed home invasions, violent muggings and safecrackings. The only person that appears to have been seriously injured was a man shot in the shoulder during a home invasion in the R. M. of East Kildonan.

The situation was bad enough that Winnipeg's police chief was given the authority to get more police cruisers on the road ASAP, even if that meant temporarily renting vehicles until the tenders for purchase could be prepared. 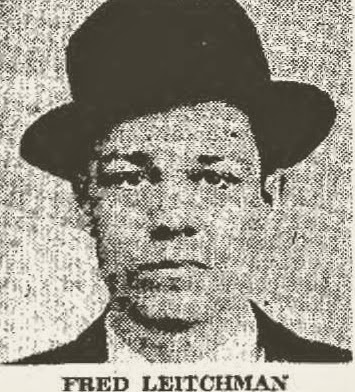 On February 23rd police arrested Theodore Fred Leitchman in a downtown hotel. Soon after, three other men were also picked up, including Fred's brother Stephen. The four, sometimes individually and sometimes in pairs, were believed to have been responsible for many of the recent robberies.

There was no word on what led police to Leitchman but he had been "living it up" in one of the city's best hotels by eating gourmet meals and tipping staff generously, (one of the crimes he was involved in resulted in the theft of $350).

Fred Leitchman was a career criminal and well known to police. His first stint in captivity was at the Portage la Prairie youth reformatory when he was just fourteen. In fact, seven of his twenty-three years had been spent behind bars.

In May 1939 Leitchman plead guilty to attempted robbery and "shooting with intent" for Ellice Grocery, plus another charge of robbery and garage breaking at other sites. He was sentenced to a total of seven years in prison.

This didn't put an end to Leitchman's life of crime. No sooner had he been released (early) in February 1945, he went on another robbery spree. He was captured in a dramatic car chase involving police and a taxi cab that he hijacked.

In March, Leitchman was in court facing nine charges. Most were robbery-related but there was a charge of attempted murder for again firing his gun at a clerk. He was found guilty of four charges and sentenced to ten years in Stoney Mountain. He later plead guilty to four more and was sentenced to another ten years to be served concurrently with the first. (The attempted murder charge was reduced by the Crown to shooting with intent.)

Leitchman was released from Stoney Mountain in April 1954. On May 31st he was found dead in a single vehicle car accident on the highway just outside Foam Lake, Saskatchewan. He had stolen the car from the village. A loaded 9 mm automatic pistol was found in the wreckage. 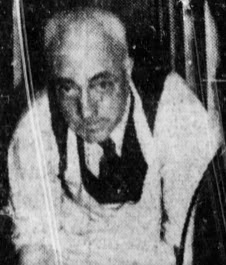 As for Harry Spottiswood, he didn't live to see Leitchman's later crime sprees. He died August 6, 1940 in St. Boniface Hospital after a lengthy illness. He was just 53 years old. Phoebe Spottiswood continued to live on-site and run the store until around 1947. She died on January 10, 1971 at the age of 86 while visiting her daughter in Los Angeles.

The store then spent a year or two as "Gibson's Foodland" run by Albert L. Gibson. 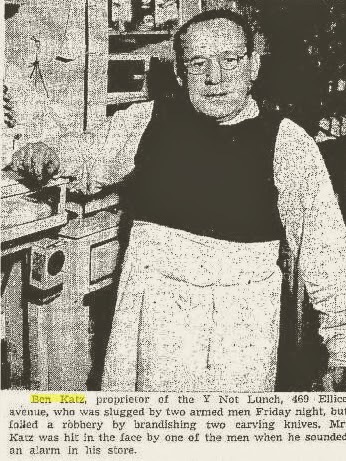 Benjamin Katz ran Y-Not Lunch (sometimes referred to as Y-Not Confectionery) one block east of Ellice Grocery at 469 Ellice Avenue. In 1949 Katz and neighboring businesses were informed that their building would be demolished to revamp the Ellice and Balmoral intersection.


Katz bought 501 Ellice and relocated his business there.

Tells me that some things just never change…

Habitual criminals still contributing to the vast majority of crime we experience in our City.

Wow around my neighborhood. I find it cool because I shoped there before. It is nice to know the history of that place now